By Sudheendra Kulkarni
March 25, 2009 15:10 IST
Many things about Indian democracy are not as complicated as they seem. For all the maddening diversities of our country -- regional, social, economic and political -- there is something which can be called the "collective mind of the nation", at work in any Lok Sabha election.

For example, there is a simple rule that governs whether an incumbent government wins or loses its bid for a renewed mandate. If the people are happy with its performance, it wins. If they are not, it loses -- except when there is no other viable alternative. Apply this test to the Congress party's bid to win a second term, and you will see that it does not have the ghost of a chance to return to power.

The five-year performance of the United Progressive Alliance government has been so poor that it can hardly enthuse the "collective mind" of the Indian people to want to see it in the saddle a second time. Moreover, there is a viable alternative before the electorate in the form of the Bharatiya Janata Party-led National Democratic Alliance.

Here are six reasons the Congress will taste defeat in Elections 2009. The next part of this article will present the reasons that make the BJP-led NDA most likely to win the people's mandate.

1: Betrayal of the aam aadmi: The Congress party sought votes in 2004 in the name of the aam aadmi. Five years later, it has proved itself to be a party that brought pain to the aam aadmi and further prosperity to the khaas aadmi. The government is projecting near-zero inflation rate as a big achievement, but the common man knows that the prices of essential commodities, especially food items, have hardly come down from the record levels they reached during the UPA years.

The rich-poor divide got wider in the past five years, prompting Bimal Jalan, the former RBI governor, to lament last year that the wealth of 20 richest Indians was greater than the combined assets of 30 crore poorest Indians. Last month, a study by the Indian Statistical Institute, Kolkata, revealed that the number of people living below poverty line increased by 5.5 crore or an alarming 20 per cent between 2004-05 and 2008-09.  To think that the poor would disregard this reality and vote for the Congress is to think that the poor have no intelligence.

2: Concern over economic security: Widespread unemployment and under-employment has always been a harsh reality in India. But when even those already employed begin to lose their jobs, as is now happening due to the current economic crisis, the outlook becomes bleaker. The pink slips that white-collar workers get in their offices are bad enough. But it is worse for the far more numerous workers in the unorganised sector, such as those in the construction sector that has been badly hit by the economic crisis, whose dismissal is not even accompanied by the dignity of a pink slip. They are simply fired. Would people, especially young people, whose economic security is so threatened, be still willing to vote for the government of the day?

3: Concern over national security:  India has been a victim of cross-border terrorism since the early 1980s, but the past five years were the most agonising. More terrorist attacks took place, and more innocent people died, in the UPA regime than during any comparable period in the past.  One of the UPA government's first decisions upon assuming office in 2004 was to repeal Prevention of Terrorism Act. With perverse pride, it projected the scrapping of POTA as a great achievement.

"India does not need any special anti-terror law; existing laws are adequate to deal with terrorism." This was the refrain of every leading representative of the UPA -- from Sonia Gandhi to Dr Manmohan Singh to Shivraj Patil -- for four and a half years.  It took the horrific 26/11 episode in Mumbai to shake the government out of its slumber and to force it to do a U-turn on the issue of anti-terror legislation.

Who kept an utterly incompetent Patil in the home ministry for four and a half years, and for what? Who projected POTA as "anti-Muslim" and thereby communalised India's fight against terror? What message is sent to terrorists by not implementing the Supreme Court's ruling on Afzal Guru, who has been convicted in the 2001 terrorist attack on Indian Parliament?

26/11 itself was the result of a monumental failure of governance, both at the Centre and in Maharashtra. Although this was the worst attack in the annals of cross-border terrorism, the government has refused to set up a commission of inquiry to find out what went wrong, who were culpable, and how to prevent recurrence of such attacks. After all, the possibility of a sea attack by Pakistan-based terrorists was publicly mentioned by the prime minister, defence minister and the national security advisor.

Here is a telltale indication of the government's failure to fight terrorism: people from all sections of society have a lurking fear about their security, and the security of their near and dear ones, whenever they go to crowded public places.

4: Other failures of the UPA government: For any party to overcome the burden of anti-incumbency, it has to project hope and inspire the people into believing that they can trust it to create a better future. It has to possess the "Vision Thing". The UPA possessed not an iota of it. In fact, its performance spread cynicism and despair, not trust and hope. For example, the Congress manifesto does not have a single word on the party's commitment to fight corruption.

Not surprising, since Dr Manmohan Singh, though personally incorruptible, presided over the most corrupt government in India's history. Under instructions from 10 Janpath, he allowed massive misuse of institutions of governance to let Ottavio Quattrocchi, the Italian wheeler-dealer who is the prime accused in the Bofors scandal, to go scot-free. In order to ensure his government's survival in July 2008, he allowed the "Cash for Votes" scandal, the most shameful case of political corruption in the history of Indian Parliament, to be enacted.

The Congress manifesto also does not have a single word on Bangladeshi infiltration into Assam and other parts of India, which the Supreme Court has described as "external aggression". This is a shocking case of the ruling party yielding to votebank considerations for short-term gains, disregarding apprehensions expressed by several neutral observers (including T V Rajeshwar, former IB chief who is now the governor of UP) that the demographic change due to the influx of Bangladeshis could lead to another "partition" of India in the North-East.

5: UPA has withered away:  Ahead of the Lok Sabha polls, a strange situation has arisen. The UPA government is still in harness, but where is the UPA? It has simply withered away. Telengana Rashtra Samiti in Andhra Pradesh, Laloo Prasad Yadav's Rashtriya Janata Dal and Ramvilas Paswan's Lok Janshakti Party in Bihar, and Marumalarchi Dravida Munnetra Kazhagam and Pattali Makkal Katchi in Tamil Nadu have all left the UPA. The Left parties had already withdrawn their support to the UPA in July 2008 over the Indo-US nuclear deal. Dr Manmohan Singh's government, reduced to a minority, took the support of the Samajwadi Party. However, even the Samajwadi Party has now decided to ditch the Congress in Uttar Pradesh. Result: the Congress has no pre-poll alliance for Elections 2009. Does this speak of the Congress party's success in building a stable and cohesive coalition?

6: Crisis of leadership in Congress: The leadership matrix in the Congress presents several paradoxes. The person who leads the party, and who controlled the UPA government with an authority that was greater than that of Dr Manmohan Singh, cannot project herself as the prime ministerial candidate. The person who has been projected as the prime ministerial candidate, and who has already devalued his office by playing second fiddle to 10 Janpath, cannot even present himself as a candidate in the Lok Sabha elections. And the scion of the "dynasty", who has been projected as India's "future leader", is not ready to shoulder the responsibility of leading the campaign at present.

In 2004, the Congress won a chance victory, managing to secure only seven seats more than the BJP. Unless a miracle happens, there will be no Congress-led government after the elections to the 15th Lok Sabha.

Await the next part of this article: Why the BJP-led NDA will win Election 2009

Sudheendra Kulkarni is a member of the BJP's Election Strategy Group

2nd blast in bus in 9 hrs rocks Udhampur, no casualty 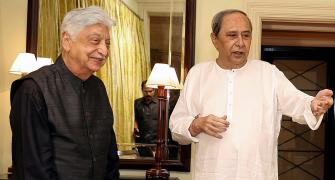 Why Did Naveenbabu Meet Mr Premji?