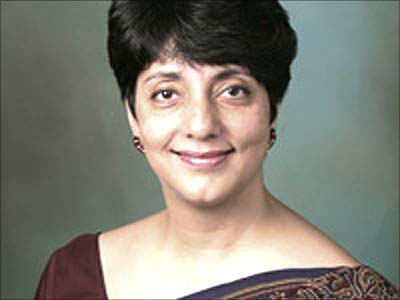 From banking to politics -- Meera Sanyal is the latest power-woman to put her hat in the election ring.

In what may be the first instance of a woman-banker joining politics, Sanyal, who is the country head of ABN Amro, has decided to take a sabbatical from the bank and contest the Lok Sabha elections from the Mumbai South constituency -- an area where she grew up.

The Insead-educated banker isn't joining any party, and will be an Independent candidate. Pitted against her will be Milind Deora of the Congress, who represented the constituency in the 14th Lok Sabha and is a Boston University graduate. The other candidate will be Mohan Rawle of the Shiv Sena, who has been a Member of Parliament since 1991 from the textile mills-dominated Mumbai South-Central constituency.

So what's her pitch going to be? Sanyal, who was appointed as the country manager last year, says the terror attacks in Mumbai last November was the trigger.

"This is something that I have been thinking about for a long time but the trigger was 26/11. Mumbai has no plan or a strategy. So, we have seen a steady decline in all aspects, be it social, health or economic parameters," she told Business Standard.

Her banker-training has come in handy as she has already prepared a draft masterplan.

"I am launching a people's campaign where their inputs will also be useful," Sanyal added.

Sanyal, however, has a formidable task ahead. In the 2004 elections in Mumbai South, no Independent was among the top seven candidates who got almost all the votes. In 1999, two Independent candidates together managed to attract just 1.4 per cent of the votes.

While deciding against accepting campaign contributions to avoid any potential conflict of interest, Sanyal will stay away from media advertisements and posters. Her website is expected to be launched over the next 48 hours.

She, of course, knows her constituency well. For, the 47-year-old banker was a student of the Convent of Jesus & Mary and Cathedral School and went to Sydenham College. Even now, her office is at Nariman Point, while she lives at Malabar Hill.

A spokesperson for The Royal Bank of Scotland, which operates in India under the ABN Amro branch following a merger in 2007, said the bank would announce the interim management arrangement early next week. Madan Menon, who heads the global banking and markets division at the bank, could be the interim CEO, sources indicated. The bank is selling its retail and SME banking unit in India and seven other Asian countries.

While there have been quite a few professionals-turned-parliamentarians, most of them have a political lineage. For instance, Jitin Prasada, the minister of state for steel, worked with DSP Merrill Lynch. Similarly, Wharton-educated Sachin Pilot worked for General Motors before contesting from Dausa in Rajasthan, a constituency that was earlier represented by his father Rajesh Pilot.

Even the likes of Ajit Singh, whose father Charan Singh was a prime minister, worked for IBM. Another former prime minister's son Ajeya Singh, who worked for Credit Suisse First Boston and Lehman Brothers, is contesting elections from Fatehpur on a Lok Janshakti Party ticket.

"Sixty years ago, the founding fathers all came from professional backgrounds but it is a real pity that things have changed now," said Sanyal.