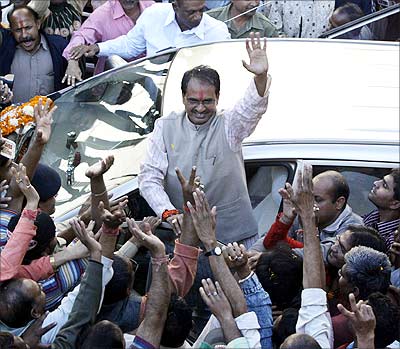 Madhya Pradesh Chief Minister Shivraj Singh Chauhan is one of the two Bharatiya Janata Party leaders (Chhattisgarh Chief Minister Raman Singh is the other) who 10 years ago kicked the Congress party out of power and then in 2008 slammed the door shut on the grand old party.

As he prepares to deliver another knockout punch in the general election, Krishnakumar P explains the reason behind the Madhya Pradesh chief minister's success.

Free television sets. Rice at one rupee a kilogram. National Savings Certificates bonds for the girl child and all-round care for the mother.

The first two are the brainchild of, respectively, Tamil Nadu Chief Minister M Karunanidhi and Raman Singh. The third is that of Shivraj Singh Chauhan.

There are two differences here. The first, evident at a glance, is that while numbers one and two are unapologetic populist measures, number three is a welfare scheme.

The second difference, not so apparent, is that while the first two were hurried announcements made during the run-up to crucial assembly elections, the third was well-thought out and introduced 18 months before elections. Thus, by the time the voter queued up to vote, instead of a mere promise, he had already seen the benefit of the schemes.

And the timing and intent are not the only parameters that set the low-profile Chauhan apart. The real genius of his idea lay in the common motif of his schemes: Women.

The result was there for everyone to see. Not only did BJP buck anti-incumbency, but Chauhan himself was elected without ever once campaigning in his constituency Bundhi.

The most well-received among his multiple welfare measures were:

The Ladli Lakshmi Yojna: When a girl child is born, the state buys National Saving Certificates worth Rs 6,000. It then buys certificates for the same amount annually for the next four years. Rs 2,000 is given back to the family when the child goes to class 6. Rs 4,000 for class 8, and Rs 7,500 for class 11.

The main objective of the scheme was to create a situation that will prevent female infanticide. When the parents know that the major financial needs of a child are going to be taken care of by the government, there are more chances of the child surviving.

The other objectives were to increase the sex ratio, which was the second worst in the country, to discourage child marriage and ensure that the girl child at least gets school education.

The scheme is only for parents who restrict themselves to two children and are not tax-payees.

The Kanyadhan Yojna: The state gives Rs 7,500 for poor families during the time of a girl's marriage, and

The Janani Suraksha Yojna: Where the state provides all economic and health support to a pregnant woman till the time of delivery.

How did Chauhan hit upon this brilliant strategy?

There are a couple of reasons. One is about the chief minister and the other about the people. First, there was absolutely nothing going for Chauhan when he took over the reins. As he himself would be the first to admit, Chauhan does not compare with a Narendra Modi or Uma Bharti when it comes to charisma or mass leadership. So, when he took over the reins, he had to deliver on the ground to establish himself.

Explaining how things worked out in the chief minister's favour, journalist and author Rashid Kidwai says the biggest strength for Chauhan is that all these schemes are targeted at the poor and the women. "These have been implemented well to a certain extent too. The main plus point is there is no discrimination or any other hassles. The poor across the state get it irrespective of caste or religion. That has won the people over," he said.

When he became chief minister, and there was no way to drastically usher in development, he leaned on his bureaucrats. "They delivered. The Ladli Lakshmi scheme for one exists in other states too. And then, the credit for tailoring it for Madhya Pradesh and implementing it goes to the babus," Indore-based journalist and analyst Manohar Limbodiya said.

The second reason for the popularity and acceptance Chauhan and his measures have got is that for the people in a state like Madhya Pradesh, which has not seen much in terms of development, any work is better than no work at all.

Thus, though his schemes have not dramatically improved the lot of the poor, people see him as trying to do something for their well-being. "You should understand that in a place like MP, a perception that there is development happening is more important than actual development," Kidwai said.

"Not much might have changed. But when people see an ailing elder being taken care of by the state or a pregnant woman being taken to the hospital in a state ambulance from a remote village, they are reassured. The ambulance might have dropped the patient at the hospital and left. After childbirth, the mother might have had to come back to the village all by herself. But the takeaway is that the government is seen to be doing something," Kidwai said.

So, how does one rate the chief minister's welfare schemes? Have they brought about the desired change? Have they delivered on all promises? What does the coming days hold in store?

According to a government official, even the Ladli Lakshmi programme is not free of issues.

"Even explaining the scheme to the people is a problem. They do not understand the complexities of how the 'money grows'. Naturally, they are suspicious and sceptical. And since not every delivery happens in a hospital, following the births and enrolling the children is also a problem," he said.

Though the Ladli Lakshmi is the marquee welfare scheme, the Kanyadan and Janani schemes have touched more lives. "Even otherwise, it would take two decades for someone to realise the benefits of the Ladli programme," the officials said.

Another problem is the depleting funds in the state's coffers. Though Madhya Pradesh has been facing revenue problems ever since Chhattisgarh was formed, the present times are really hard on the state treasury.

"The schemes might have worked till now. But, what next? That is the question. The state has not been generating enough revenue of late. And it has started to show on these schemes. For instance, the administration had gotten a lot of cancer patients across the state. But in recent months, none of the families of people who died got the insurance money. That's because the state does not have the money. It looks like the government's coffers will go empty any time now. When that happens, what will happen to the schemes?" Limbodiya asked.

The 2008 mandate and the imminent success in the Lok Sabha election have shown that Chauhan can grab an opportunity when he sees one.

His second term will show whether he is equally good at creating opportunities when there are none.

What Were Shinde-Fadnavis Chatting About?

And The Carnage Continues in Ukraine

The steel behind the Gandhi smile