News
Business
Movies
Sports
Cricket
Get Ahead
Money Tips
Shopping
Sign in  |  Create a Rediffmail account
Rediff.com  » Election » 'We are willing to pay for the basic amenities'

'We are willing to pay for the basic amenities' 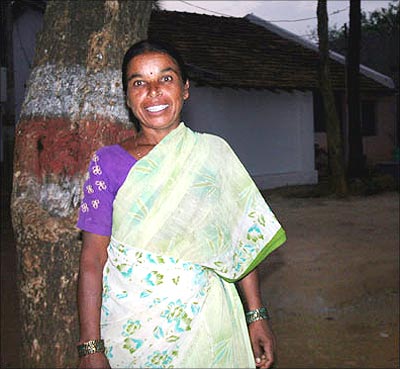 Sharada Bai, 43, of Beeranahalli village in Shimoga stands outside her home talking to the women folk about the meal she is planning to prepare. She is suddenly reminded of the fact that there is no electricity and will have to wait for the power to come back so that she can cook.

"It is an everyday affair over here. The power is so erratic and this has affected us badly. There was a time when we were used to working with kerosene lamps, but now we are so used to electricity that work comes to a stand still when the power goes off," Sharada says.

"I have two school-going children who need to study. Poor things, they leave so early in the morning to school and by the time they get back it is so late. They have to complete their home work soon and go to sleep. But they have to sit and wait for the power to come back so that they can do their home work," Sharada also says.

"When the BJP (Bharatiya Janata Party) came to power in the state, I thought that they would address the problems of poor people. I have seen the chief minister pass by this place so many times. On several occasions, he has assured us that the power problem would be solved. I have even put across my point to his son, Ragavendra who is standing for Lok Sabha from Shimoga," Sharada adds.

"We may be poor and unlike the people of the city, we do not have the influence or money to get our work done. Our leader must understand this and not treat us as mere voters. We are human beings and we have to live a good life. It is not as though we are asking for something free. We are willing to pay for it and we deserve better service," says Sharada.