No dearth of PM material in BJP: Advani 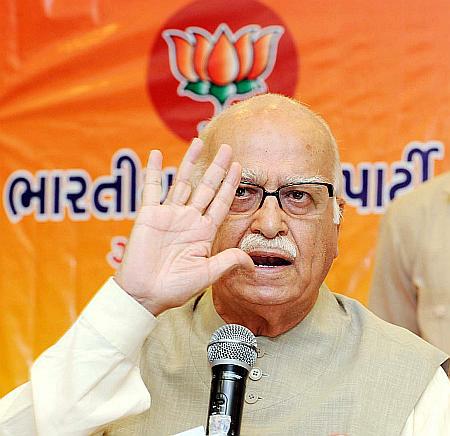 L K Advani on Tuesday responded to the growing chorus in the Bharatiya Janata Party for Narendra Modi as the next prime ministerial candidate saying the party has no dearth of able leaders, who can rise to the top post, and that he is 'very happy' when the Gujarat chief minister is praised.

Attempting to keep open the issue of the party's prime ministerial candidates after him, the BJP stalwart also said that in other parties even if somebody just spoke of potential PM candidates the person would be "hounded".

"In our party, there is no dearth of people with the ability and calibre to rise to that level. That's a great thing," he said in reply to whether Modi would be BJP's PM candidate in the next general elections. "Today when Narendra Modi is praised, I feel very happy."

Advani cited the example of Madhya Pradesh Chief Minister Shivraj Singh Chauhan who has done "exemplary work" in three years and had the potential to rise to the top.

Advani's comments came close on the heels of several leaders like Arun Jaitley, Arun Shourie, Vekaiah Naidu and Yashwant Sinha projecting Modi as the next prime ministerial candidate after him. But leaders like Sushma Swaraj did not share their enthusiasm in pitching for Modi saying if the Head of a Family is there then one usually does not talk about who will be the next to head the family.

Advani described remarks attributed to Shourie and Jaitley as 'off hand comments'.

Advani said even Modi himself has clarified on the leadership issue apparently referring to the chief minister's comments that the octogenarian leader will be the PM candidate even in 2014 elections.

"I think the last word on that issue has been said by Modiji himself. I don't have to add to that," he added.

According to Advani, BJP is a party which has groomed its second rung leadership quite well and they all are equally qualified for the any post.

Advani denied that there was any rift in the party over Modi being projected as its future PM candidate.

"There is no fight in the party over Modiji being projected as the future prime ministerial candidate. Rather I am proud of the fact that ours is a party where a second line of leadership is ready and which has aspirants for the coveted post," Advani said.

"Pandit Deendayal Upadhyay never said that Atal Behari Vajpayee would be PM candidate. Subsequently, Vajpayee didn't say that Advani will succeed him. It is the party which decides the leadership issue," he said.

He emphatically said that it is for the party to decide who will be its leader in the next general polls. The senior BJP leader said that the issue is being raised again and again either to denigrate Modi or provoke some kind of internal bickering in the party.