BJP's prime ministerial candidate L K Advani today sought a fixed term for the Lok Sabha and Assemblies and wanted voting to be made compulsory with elections to be scheduled in the month of February.

"I suggest that political parties and the Election Commission should think over whether we can change the Constitution for a fixed tenure for Lok Sabha and Assemblies," 81-year-old Advani said after casting his vote in Gandhinagar.

"We are following the UK pattern which does not suit us and we should change it," he told reporters.

Advani's suggestion implies that even if the government of the day loses its majority in Lok Sabha, the House should not be dissolved and a new government should assume office.

Pointing out the difficulties being faced during the summer months, Advani, who is seeking re-election from Gandhinagar, said "Polling percentage dips during the summer and elections should be held in February."

The senior BJP leader also said voting should be made compulsory. "Political parties and the EC should discuss to make voting mandatory."

He said the BJP will emerge as the single largest party and that the NDA will form the government at the Centre.
Advani, along with with his wife, cast his vote in the morning. 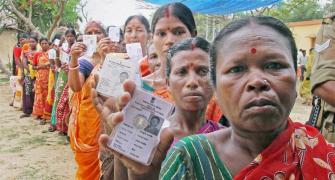 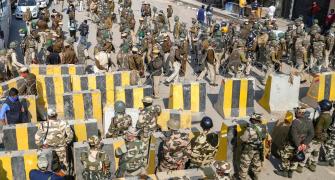