'BJP will emerge as the single largest party' 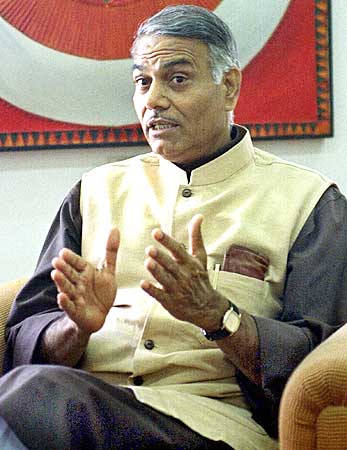 Yashwant Sinha, the senior Bharatiya Janata Party leader and former finance and external affairs minister, is known for his strong opposition to the India-US nuclear deal.

At 72, he looks fit and always ready for a fight.

The former bureaucrat, a polished speaker and pragmatic politician, has just returned from campaigning in his constituency, Hazaribagh, Jharkhand. He spoke to rediff.com's Sheela Bhatt on a range of issues.

'We got nothing from the nuclear deal' 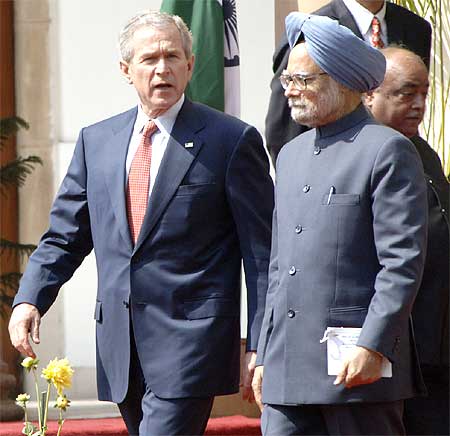 Now my charge against this government is that in the last five years they weakened India's position because they concentrated only on one issue -- the India-US nuclear deal. They disregarded our warning.

It was projected that India-US relations reached such heights that India has never seen before. Right?

Now, look at the way the Obama administration is reacting to the IT industry in India. They are curtailing the number of professionals going to the US. It is Obama's formulation that Buffalo and not Bangalore should get jobs.

He is saying he will withdraw tax concessions to companies outsourcing (jobs to India).

On one hand, Obama is trying to reduce job opportunities of Indians in India and also, in the US.

On the other hand, see what America's main purpose was in having the nuclear deal.

They used to say that the American nuclear industry will get going. We will help them through our resources by importing nuclear reactors. It would have created jobs in the US. This was the contradiction in the UPA policy.

Secondly, as far as Pakistan is concerned, the US is tilting towards Pakistan more and more. It is favouring Pakistan more than India. The latest from the Obama administration is that India should sign the nuclear Non-Proliferation Treaty along with 3, 4 other countries.

The Comprehensive Test Ban Treaty is just waiting in the wings. That demand will come too. Since the US has not signed the CTBT they are talking of the NPT.

Why should we sign the NPT? The Government of India told us that through the India-US nuclear deal India is recognised as a 'Nuclear Weapons State.'

So after four years we know that we have got nothing out of the nuclear deal. We are again under pressure to sign the NPT, the CTBT and the Fissile Materials Cut-off Treaty.

We will have to follow the US dictates on these issues. I see lots of problems emerging in our relations with the US because President Obama continues to follow this path, which I would say is not very friendly or a path that is not conducive to the development of friendly relations.

We should also follow our national interests. It should be as clear as that.

India does have enough argument, enough strength and enough resolve.

I don't think the Kashmir issue will be brought up by them. We have sufficiently briefed them to not bring it centre-stage or to bring third party interference. Even after this if they try, then they deserve a huge rebuff. If any new government doesn't take care of our national interest, then it isn't worth its salt.

I do not know what will happen if the Left parties motivated Third Front government comes to power, then obviously it will be a difficult situation. I don't distrust America as the Left leaders do. But I have differences with regard to certain US policies. I strongly feel we should not treat the US as an adversary, but we have unresolved issues and we should work on it.

I believe we should not implement the nuclear deal at all. L K Advani has said that that bill should be 'resent.' I am saying do not take those steps required to implement the deal like changing domestic laws. If we come to power, I take the guarantee to sustain the external pressure on India, but I don't take a guarantee for Dr Manmohan Singh.

'The UPA has disintegrated and we are still intact' 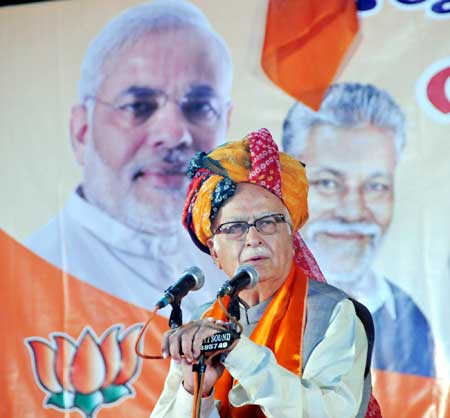 I will give you a completely honest and objective picture. See, the last time the BJP was short of the Congress by only seven seats. They were 145, we were 138. But, still, the impression that went on was that we lost the election because our numbers had declined.

Now we have major gains to make in Uttar Pradesh, Gujarat, Bihar, Jharkhand and Assam while we will also gain in Karnataka, Maharashtra, Haryana and New Delhi.

We may have two or three seats from Andhra Pradesh, Tamil Nadu, West Bengal and maybe from states where we are zero.

We have some difficulty in Orissa where we parted company with the Biju Janata Dal while we have some issues in Rajasthan.

Therefore, if you look at the overall picture and compare it with the Congress you will know why we are confident.

We will be the single largest party in the next Lok Sabha.

Similarly, the UPA has disintegrated and we are still intact except for the BJD setback.

In terms of UPA and NDA numbers, the NDA will be the bigger block. That gives us the major advantage to start with. We certainly need to look for new allies.

In the Third and Fourth Front there are contradictions. Between J Jayalalithaa and M Karunanidhi and between the Trinmool Congress and the Left parties there are issues. Also, the Telugu Desam Party and Congress have major contradictions.

The Congress is going to lose at a wholesale rate in Andhra Pradesh. We are better placed to find new allies. Because of the contradictions that regional parties have with the Congress they will find it advantageous to go with us.

'Nobody is bothered about 9 percent growth' 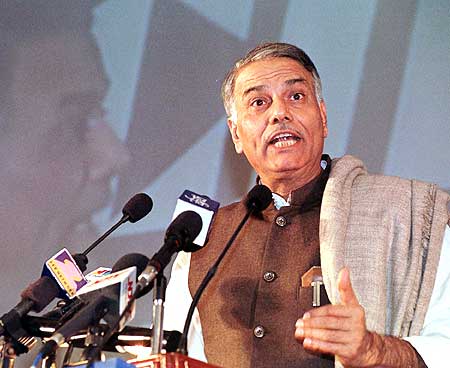 What may not work out for the BJP

Our parting with the BJD is not going to help. It will work against both. Also, we had some problem in Rajasthan. Many of these issues have been resolved now, but we lost the assembly election due to that.

It could have an impact on our results in the Lok Sabha election, but apart from these we won't have any major disadvantage.

His campaign in Hazaribagh

I campaigned for some 105 days. I got completely cut off from New Delhi.

From early morning till midnight, I went out to the villages. People have problems and those are not the problems that worry you and me in New Delhi. Let me tell you that the issues raised by the media in New Delhi has no bearing or relevance at all to people in the villages.

They are concerned with the problems of their daily lives. Lack of electricity, schools, drinking water worries them. When they ask for roads or canal water, I can't give them a lecture on economic policy or foreign policy.

Then, there is the credibility gap. It is present across the board for all politicians. They feel politicians come to them only at the time of elections. I formulated a standard response for my cynical voters. I found that it is working.

I saw that women were coming to my events in a large numbers. I asked them their grievances. They said they did not get old age pension, they want BPL (Below Poverty Line) cards, or social security pension, and, many of them said they don't have a house under the Indira Awas Yojna.

They would take us to show their fallen huts. They would complain about drinking water.

There were development issues besides these welfare issues. I have promised them that I will return after winning the election. We will call a general assembly of each village.

In that meeting all of us by consensus will decide which are the five most important development issues. I have told them that you prioritise issues like hospitals, schools, water etc. I said the first issue will be taken up in the first round. I went to almost all villages to tell them this.

There is the National Rural Employment Guarantee Act. But you don't see permanent assets for the villagers through this scheme. It has so many problems attached to it. I have a large coal mine area in my constituency. Villages, mines and cities -- all of them have different problems and you can't talk in the same manner in these places.

The only pan-India issue is price rise. This issue has been played down by many in this election. Have you heard anyone talking about it?

Kerosene scarcity is the major issue in my area. They cook with it, they light their lamps with it.

'We are not pushing Modi upward' 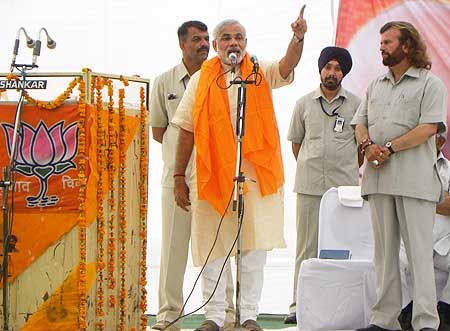 As far as Narendra Modi is concerned, yes, he has emerged as the popular campaigner for the BJP. Who can deny this? He has attracted the most crowds compared to any other political leader across the political spectrum.

Many times crowds have to be brought for Sonia Gandhi and Rahul Gandhi, you don't have to do it for Modi. They turn up by themselves. So, Modi is popular. Modi attracts crowds. This is something that you cannot deny.

Now, whether secular opinion is against him or for him -- that is not our problem. The secular opinion is also watching Gujarat. They know how under Modi, Gujarat has done miracles. We are not pushing Modi upward. Nobody pushes anybody. Nobody can make a leader except in dynastic politics.

Whether you like it or I like it or not, Modi has emerged. There are other leaders too. But you temper your ambitions with a touch of reality. When you apply that touch of reality then you find that somebody is ahead of you. One has to acknowledge it at a given point of time.

On the Gujarat riots

Sheelaji, let me tell you that immediately after the anti-Sikh riots in New Delhi in which 400 percent more people were killed than in Gujarat, Rajiv Gandhi was accepted as prime minister.

In spite of the fact that he said that when a huge tree falls the earth shakes. Still, he was accepted as prime minister.

The Congress has come back to rule this country in 2004. How long did it take India to forget the anti-Sikh riots in Delhi? Why do you remember only the Gujarat riots?

There is a conspiracy behind it. There is no proof that Modi or his government sponsored it. This is the canard being spread and repeated by those who want to keep the issue alive.

On whether Muslims will ever accept Modi

Have the Muslims of country (11 percent of the population) accepted the BJP? Why talk of Modi? The BJP ruled this country for six years. We have governments in many states. Have they accepted us?

I consider myself secular. I am asking you a question. Do Muslims in my constituency vote for me? They don't, because I belong to the BJP. So who is keeping them away?

It is not the BJP that is keeping Muslims away. It is vested interests and Muslims themselves who are keeping away from the BJP.

I am waiting for the day when Muslims will realise that they are being used as the voting machine once in five years by the so- called secular parties.

Muslims will realise that their future lies in making peace with the BJP and coming together on issues concerning our country.