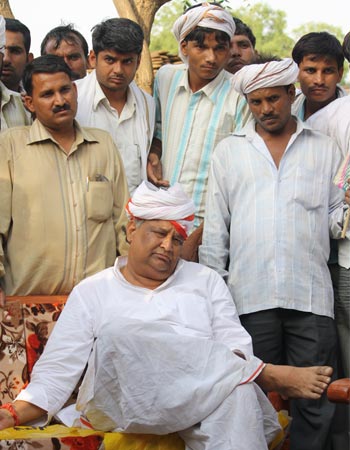 Prasanna Zore and photographer Rajesh Karkera travel to Dausa, the Pilot family's political bastion in Rajasthan, and discover a complicated caste contest on the cards.

"I will win the battle of Mahabharat from Dausa," thunders Dr Kirori Lal Meena, the influential Independent candidate at a rally in Geejgad, a small town of 10,000 people, 36 kilometres from Dausa. The crowd, comprising Meena, Gujjar, Brahmin, Muslim, Rajput and Bania voters, cheer Dr Meena.

Dr Meena is banking on this caste arithmetic to win Dausa, pitted as he is against the Congress's Laxman Meena (who resigned as Rajasthan's additional director general of police to contest the election), the Bharatiya Janata Party's Ram Kishore Meena and Qamar Rabbani Chechi, a Gujjar, who has travelled from Jammu and Kashmir to fight for the cause of his Gujjar brethren.

Dausa has been the domain of the Pilot family. Rajesh Pilot won this seat on five occasions between 1984 and 1999; after his untimely death in a road mishap in June 2000, his wife Rama won the seat in a by-election before her son Sachin successfully contested this seat in 2004. Rama Pilot is an MLA from Dausa. Sachin Pilot has moved to Ajmer this election after Dausa became a reserved seat after delimitation.

"During the reign of the Pilots, the voters in Dausa were not divided on caste," says Chandu Sharma, a supporter of Dr Meena. "However, last year's agitation where the Gujjars demanded scheduled tribe status like the Meenas has made people very caste-conscious. They are likely to vote on the basis of caste this election."

Check out the Caste arithmetic 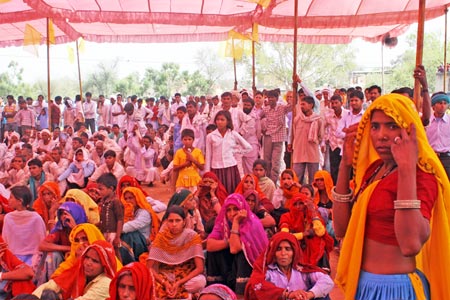 With all three Meena candidates vying for the 350,000 Meena votes in the 1.3 million voter constituency, caste has changed the equation dramatically in Dausa.

The three Meena nominees are courting the other castes fearing a trifurcation of Meena votes as the state goes to polls on May 7.

"We are confident of getting the support of the scheduled castes, Muslims and Malis who are our traditional voters," observes Kishen Meena, who plans Congress candidate Laxman Meena's poll strategy from Lalsot, a small town en route to Dausa. He believes Gehlot's development agenda will win the battle in Dausa and the division of Meena votes is no cause for concern.

Independent candidate Chechi is banking on Muslim and Gujjar votes to make a mark. Dubbed an outsider by the Kirori Lal Meena camp, he is fighting a losing battle. However, his presence in the electoral fray has made the two national parties sit up and take notice as he can take away a sizeable chunk of Gujjar and Muslim votes.

"This will only help us as Doctorsaheb (Kirori Lal Meena) believes in the agenda of development and not caste or religion," says Namosingh Meena who owns a sweetmeat shop in Geejgad. He is confident that Geejgad voters will endorse Dr Meena. 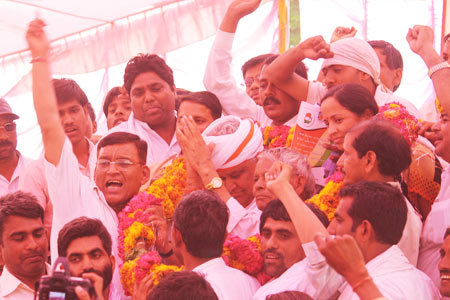 Image: Dr Meena is contesting as an Independent this time

Dr Kirori Lal Meena served as minister of food and civil supplies in the Vasundhara Raje-led BJP government before he left that party and won election an Independent MLA last December.

His request for an electoral ticket to contest the Lok Sabha poll was turned down by the Congress. His wife Golma Devi, an Independent MLA and minister in the Gehlot government, resigned soon after her husband was denied the ticket.

The couple's support had enabled the Gehlot government to inch close to the 100 MLA mark last December. That camaraderie vanished after Dr Meena contested the general election as an Independent.

"He is an opportunist who can change colours at the drop of a hat," alleges Congressman Kishen Meena.

Dr Meena is playing the sympathy card, as someone who sacrificed his seat to protect the self-respect of the people of Dausa.

"I asked Gehlot to keep this (Dausa) seat vacant for me so that I could fight as an Independent and win this seat for him," he tells supporters at a rally. "I could not fight on a Congress ticket. As an Independent MLA it would have led to the annulment of my tenure in the Rajasthan assembly," he says, adding that it was he who rejected the Congress offer, and not the other way round. 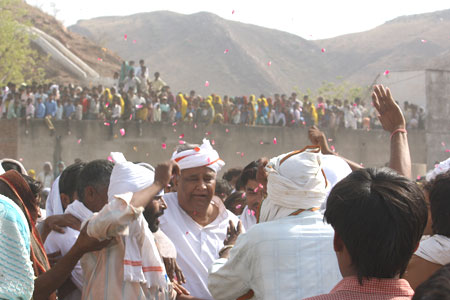 The BJP's Ram Kishore Meena seems to be running a silent campaign. BJP posters and flags are missing in Dausa.

The Gujjars, the BJP's most vocal supporters, deserted the party after the Vasundhara Raje government messed up the Gujjar agitation last year, which led to the deaths of 26 Gujjars in police firing.

"The Gujjars will not forgive the BJP for shortcharging us on the reservation issue. What was the need for the police high-handedness?" asks Ram Naval, a Gujjar who was once a BJP supporter.

He has decided to cast his lot with Dr Kirori Lal Meena this time as the Independent has promised Gujjars all-round development, and not just his support on the reservation issue.

"Rajasthan has some 7 million Gujjars," adds Naval, "a large section of which deserted the BJP in the 2008 assembly election, leading to the party's defeat."

With the Gujjars likely to vote against the BJP, the Meena vote split three ways and the Muslims divided between the Congress and Chechi, the Malis, scheduled castes, Brahmins, Banias and Rajputs may decide who will win Dausa. This new caste arithmetic will erase the Meena-Gurjar unity that ensured Sachin Pilot's triumph in 2004 by over 110,000 votes.