Points to ponder in final phase of Bengal poll 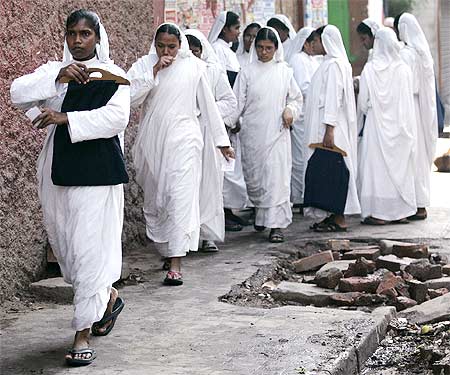 My five-year-old niece usually takes about 45 minutes to finish her glass of morning milk. But for the past couple of days she has been drinking it real fast, thanks to the Central Reserve Police Force jawans marching in and around the polling booths in the area where we live.

She assumes they are policemen out in the streets to teach 'unruly' kids a lesson.

Having spent 30 years in West Bengal, I have seen many elections but never ever have I witnessed an election enveloped by this much security.

Be it South Kolkata, Jadavpur, Behala and Dum Dum, you are sure to be intimidated by awe-generating jawans clad in olive greens.

"Approximately 250 companies of central forces and 200 companies of state police force have been deployed for the elections. There are armed personnel in almost all premises," state Chief Electoral Officer Debashis Sen informed reporters on the eve of the third and final phase of the Lok Sabha election in West Bengal.

Asked how many booths are tagged sensitive, he said, "Considering all the booths have armed cover, we will say that all of them are."

Elections are being held in 11 Lok Sabha seats spread across Kolkata, besides the adjoining North and South 24-Parganas districts. Voters exercised their franchise in 17,136 booths.

Subhas Chakraborty takes on Karat and Co yet again 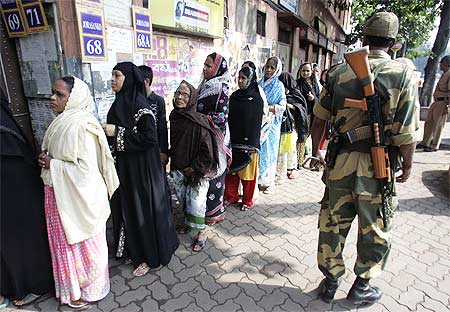 Though his comments to a television channel a couple of days ago ruffled many feathers in the Communist Party of India-Marxist Politburo, Chakraborty's contention was driven by logic.

The minister told the television channel that CPI-M Politburo members as well as others party officials must fight elections to understand the public pulse better.

The people's approval should justify the acceptability of leaders, he said.

Chakraborty unafraid of the consequences 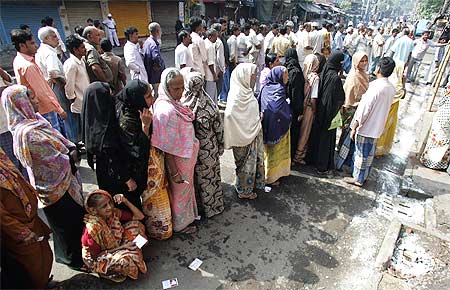 Image: Voters in Kolkata
Photographs: Jayanta Shaw/Reuters
Taking a dig at CPI-M General Secretary Prakash Karat and Politburo members Sitaram Yechury, Brinda Karat and Biman Bose, the West Bengal minister said, 'It is improper to formulate policies on the basis of some reports sitting pretty in an air conditioned room.'

He did not mince words, describing the Congress as the biggest anti-imperialist force in the country, and added that the Left would do better to walk in tandem with the Congress to hold a key position at the Centre.

When rediff.com approached the minister on Tuesday, Chakraborty said he stood by every word he had said and was not afraid of the consequences.

On July 22 last year, the minister had raised his voice against the Politburo decision to seek Lok Sabha Speaker Somnath Chatterjee's resignation after the Left decided to withdrew support from the United Progressive Alliance government over the India-United States nuclear deal.

Chakraborty was slapped with a showcause notice for speaking his mind that time. This time too, the CPI-M's West Bengal boss Biman Bose said the party has no connection with Chakraborty's political assessment of the Congress.

'The comment made by comrade Subhas Chakraborty in an interview to a private news channel on May 11 has no connection with the political positioning of the CPI-M,' Bose said in a statement.

'The support to the Congress-led government was withdrawn by the party in July last year based on the unanimous decision by the central committee,' the statement said.

For the first time since 1952, Basu didn't vote Image: Voters in Kolkata
Photographs: Dipak Chakraborty
According to Subhas Chakraborty, a protege of former chief minister Jyoti Basu, the summer heat has taken its toll on the CPI-M leader, who will be 95 on July 8.

Though Chakraborty appealed to the state chief electoral officer to make special arrangements for Basu, his appeal was rejected.

"A special request was made, but the law doesn't have any provision for postal ballot in such cases. A voter who has a problem can come to the booth in an ambulance," state Chief Electoral Officer Debashish Sen said.

He is a voter in the Barasat parliamentary constituency where All India Forward Bloc candidate Sudin Chattopadhyay is pitted against Trinamool Congress candidate Kakali Ghosh Dastidar. 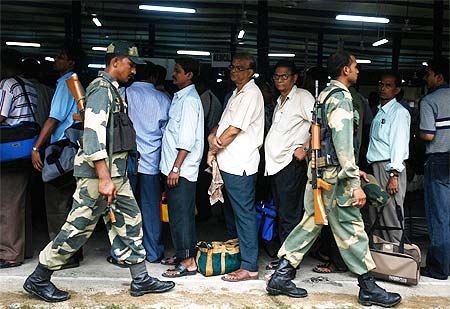 Armed men are hiding in several guesthouses across the city, they warned, waiting to unleash violence in the city and its adjoining areas to disrupt the polling process. Their dharna was aimed at bringing 'this fact to the EC's notice.'

BSP has a candidate in every constituency 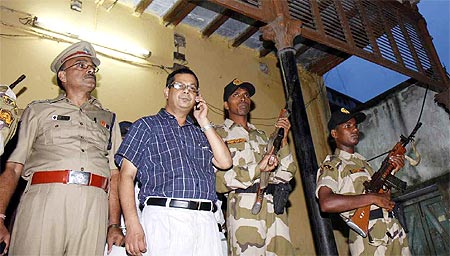 State BSP president Manoj Hawlader said this is his 'party's attempt to get a toehold in the state so that the voice of the backward classes can be heard.' Observers believe the BSP's effort will eat into Trinamool Congress and Congress votes.

Asked to comment on the 'wind of change' people are talking about in Bengal, Hawlader is quick to reply: "Arre, what change? The real change will happen when India gets a prime minister from among the Dalits."

"We make such tall claims about our democracy, but why do we chicken out when one talks about Mayawati as the prime minister of India?" he asks rediff.com.

Tough fight for the CPI-M 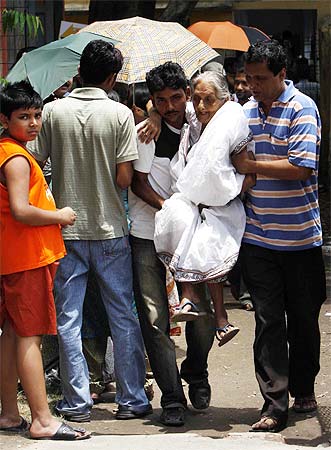 Image: Sabita Chatterjee, 91, arrives at a polling booth in Jadavpur, south Kolkata
Photographs: Dipak Chakraborty
Way back in February, Jyoti Basu said the electoral battle would be a tough one for the Left Front if an alliance was forged between the Trinamool Congress and the Congress.

That alliance has materialised and it is being predicted that the Left might lose some important seats in Bengal.

Pre-poll surveys indicate that both the rural and urban populations are irked by the ruling party's stand on the Nandigram and Singur issues. Analysts also suggest Trinamool Congress chief Mamata Banerjee's adamant stand over the Nano project in Singur may eat into her party's urban vote bank to some extent.