In the name of the father & grandfather... 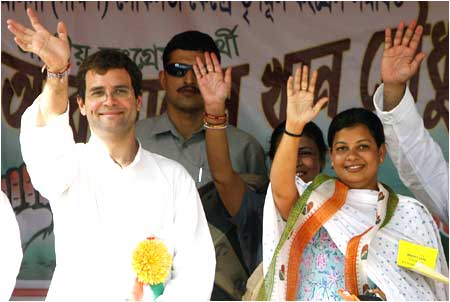 A famous political surname has paved the way for many young MPs into the nation's pinnacle of electoral politics -- Parliament.

Twenty-one of the 30 MPs below the age of 35 belong to families who are in Indian politics or have been MPs or legislators in the past.

A Deputy Speaker of the Lok Sabha, P M Sayeed was the MP from Lakshwadeep for ten consecutive terms, till he lost the 2004 election by a mere 71 votes. One of the senior-most members of India's Parliament and an MP for 35 years, he passed away in 2005.

Last December, the two Houses of Parliament hastily passed a Bill in two days to amend a Constitutional order to remove the stipulation that only those born in the islands could be included in the Scheduled Tribe list. The amendment enabled Delhi-born Hamdulla to contest from Lakshwadeep.

Mausam Noor, 27, the Congress MP from Malda Uttar in West Bengal, seen here with Rahul Gandhi, is the grand-niece of A B A Ghani Khan Chowdhury, the MP from Malda for 26 years. An MLA from Sujapur, this is her first stint as MP.

Meanwhile, Jayant Chaudhary, 30, the MP from Mathura from the Rashtriya Lok Dal, is the grandson of former prime minister Chaudhary Charan Singh and RLD chief Ajit Singh's son. A first-time MP, he studied at the London School of Economics. His father is the MP from Baghpat in Uttar Pradesh.

Another new face is the Oxford-educated lawyer Shruti Choudhary, 33, of the Congress. The MP from Bhiwani-Mahendragarh is the grand-daughter of former Haryana chief minister Bansi Lal, home minister during the Emergency, while her mother Kiran Choudhry is a minister in the Haryana government.

The family names paves the way 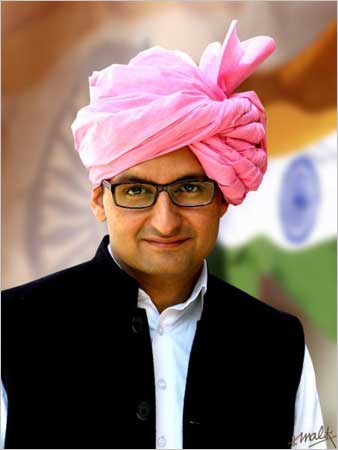 Deepender Singh, 31, the MP from Rohtak, left, is Haryana Chief Minister Bhupendra Singh Hooda's son. He won his second election to the Lok Sabha by over 400,000 votes, likely the biggest margin of victory this election.

An alumni of the Doon School and St Stephen's College, New Delhi, Kalikesh belongs to the royal family of Bolangir. First elected an MLA at 29, this marks his maiden entry into the Lok Sabha.

Ravneet Singh, 33, another first time MP, is the grandson of then Punjab chief minister Beant Singh, who was assassinated in Chandigarh in August 1995. The president of the Punjab Youth Congress, Ravneet is the MP from Anandpur Sahib.

Nilesh Narayan Rane, 28, also a fresh Congress MP from Ratnagiri-Sindhudurg in Maharashtra, is the son of former state chief minister Narayan Rane who broke away from the Shiv Sena to join the Congress, was briefly expelled before being taken back.

Agatha K Sangma, 28, from the Nationalist Congress Party and the MP from Tura in Meghalaya, is the daughter of former Lok Sabha Speaker Purno Aitok Sangma.

Varun Feroze Gandhi is the son of BJP MP Maneka Gandhi, who till recently represented Pilibhit and won the 2009 election from Aonla. His father, the MP from Amethi, was Indira Gandhi's political heir until his death in a plane crash on June 23, 1980. Varun, who has a degree from the London School of Economics, won his first election from Pilibhit by over 400,000 votes.

Dharmendra Yadav, 30, is a first-time MP from Badaun, UP. He is former UP chief minister Mulayam Singh Yadav's nephew.

21 of the 30 MPs below 35 belong to political families 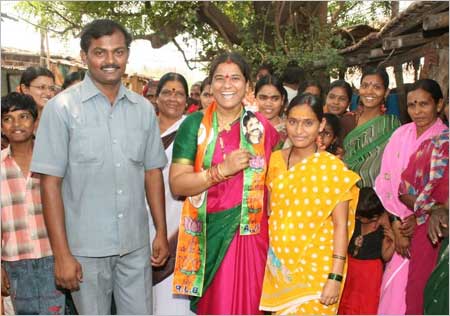 J Shantha, 35, is a first-time BJP MP from Bellary in Karnataka and the lone female parliamentarian from the state. Her brother Sriramulu is the state health minister.

Akhilesh Yadav, 35, the Samajwadi Party MP who won the election from both Kannauj and Firozabad, is former UP chief minister Mulayam Singh Yadav's elder son.

Sachin Pilot, 31, the St Stephen's and Wharton graduate, won his second Lok Sabha election from Ajmer in Rajasthan. His father Rajesh Pilot was the MP from Dausa and one of the Congress party's frontline leaders. Sachin won his first election from Dausa aged 26.

Pradeep Kumar Majhi, 33, the Congress MP from Nabarangpur in Orissa, is the secretary of the Youth Congress. He wrested the seat despite the BJD sweep in the state. His father is a former member of the Rajya Sabha.

Sameer Bhujbal, 35, the first-time Nationalist Congress Party MP from Nashik, is Maharashtra Minister Chhagan Bhujbal's nephew. Bollywood star Salman Khan campaigned for him as also for Milind Deora. The Congress-NCP government is in power in Maharashtra.

Pratik Prakashbapu Patil, 35, who retained the Sangli seat in Maharashtra for the Congress, is former chief minister Vasantdada Patil's grandson.

Having received party tickets on the strength of their political lineage, these young MPs have proved their winnability factor in the electoral contest. It is now time to prove themselves and deliver to the Indians who voted for them.