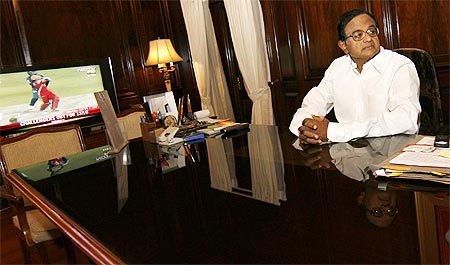 The United Progressive Alliance government got down to business in its second term with five of the six key Cabinet ministers alloted portfolios assuming charge of their respective offices today and setting out their priorities.

P Chidambaram, A K Antony and Sharad Pawar returned to the Home, Defence and Agriculture ministries they were in-charge during Manmohan Singh's first term while Pranab Mukherjee came back to the Finance Ministry, a portfolio he had held 25 years ago in Indira Gandhi's government. All the ministers convened meetings of their top officials to get a quick update on pressing issues.

Chidambaram said a 100-day action plan will be implemented from June 1 and that Naxalism, terrorism and insurgency in the North-East were the key challenges. 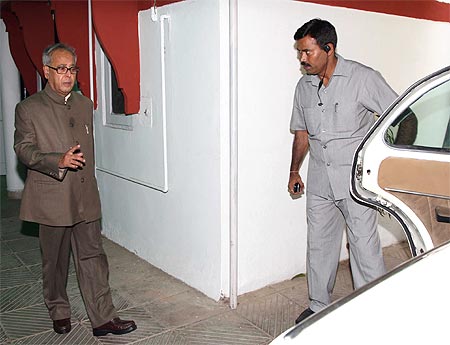 Mukherjee said his top-most priority is to bring the economy back to high growth path. Issues relating to the forthcoming Budget were discussed at the meetings convened by Mukherjee, an official said.

The cyclone Aila which hit West Bengal bringing life to a halt also engaged the attention of Mukherjee who spoke to Antony and sought assistance of the Armed Forces to help the civil administration in rescue operation.

Dressed in a light grey bandgala suit, Krishna stepped into his South Block office in the midst of developments like
the Gurudwara clash in Austrian capital Vienna and its violent fallout in Punjab, North Korea conducting a second nuclear test and a new Nepaalese prime minister being sworn in ending weeks of political uncertainty.

Voicing concern over the nuclear test carried out by North Korea, Krishna said the act amounts to violation of its
international commitments and that the development could have "adverse effect" on peace and security in that region.

Krishna also said the government was in touch with Austrian authorities and closely monitoring the situation
following the killing of a Dera sect leader in a Gurudwara. The government, he said, was "determined to ensure that the perpetrators of this completely mindless and wanton act are brought to justice." 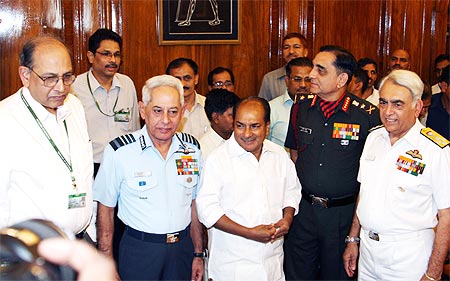 Immediately after taking over as Defence Minister Antony said that the security scenario around India is becoming more and more challenging. The minister said, "developments around us is a cause of serious concern to us.So eternal vigilance is a must".

Antony said, we have to further strengthen our security measures and also security apparatus by all means. The  minister said, there is a need to give a push to the modernisation of the armed forces. But at the same time he cautioned that "in our anxiety for speedy procurement we cannot and must not compromise transparency". Antony said, he is aware of the fact that the task which he has undertaken this time is more challenging. He promised to pay more attention and
work with more dedication, commitment and honesty to meet the challenges ahead.

Referring to the Mumbai terror attack Antony stressed the need for paying more attention to coastal security. Antony was of the opinion that infrastructure development in the North-East and other border areas is very important. Referring to the service conditions of the Armed Forces, Antony said, "Equipment and training alone will not keep the morale of the Armed Forces high. The welfare of the Armed Forces who are deployed in the far- flung difficult areas like Siachen, Nathu-La and in deep sea in submarines and dense forest have to be protected". He said, "I will take a personal interest to improve their service conditions, including their accommodation, ration, food and clothing". Antony sought the  goodwill and support of the countrymen in his task of protecting the country.