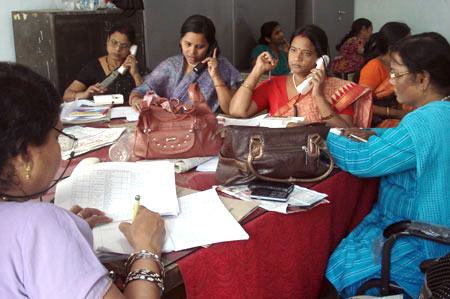 Archana Masih discovers an unusual electoral initiative in Siwan, Bihar, one of the most controversial constituencies in the country. Photograph: Seema Pant.

On the first floor of the collectorate in Siwan is a room where eight women are making calls to local residents living around the 1,763 polling booths in the constituency, one of the most controversial in Bihar and in the country.

It is from Siwan that Mohammad Shahabuddin, the Rashtriya Janata Dal MP who is now in prison serving a life sentence, won election to the Lok Sabha four times since 1996. His wife Heena Shahab is the RJD candidate in this election.

The women make the calls from 8 am to 8 pm, working in two shifts, on eight telephones, gathering feedback about the situation around the polling booths in the constituency.

"We ask them (local citizens) to inform us if there is any problem, if there is any unusual incident that could hamper polling on April 16," says Tapti Verma, a Lady Extension Officer working in the state government's rural development department, who is one of the ladies deputed for the job in the run-up to polling day.

"If there is any such incident or reason to be concerned about, we immediately alert the administration," she continues.

The initiative is directed at gathering enough information about the situation around each booth -- whether voters are likely to be pressurised by local strongmen; if it could be prone to violence; if it is communally sensitive etc.

What makes this initiative crucial is that all this information is being gathered from local residents.

Though such an exercise has been conducted on polling day in previous elections, what makes it different this time is that it began 12 days before polling day.

"We ask if anyone is troubling them and assess their feedback. It is also to tell the electorate that the administration cares," says Bandana Preyashi, the young lady district magistrate of Siwan.

The District Election Control Room had made 3,101 calls and verified 1,459 polling booths till April 11. Information is gathered from three local citizens per booth. The report at the end of the day is submitted to the election commission office.

"If locals inform us of any unusual incident near a booth and if that booth is not already included as sensitive, we inform the administration immediately so that required provisions can be made," says Satish Chandra Srivastava, the nodal officer and a district project officer.

From April 14 -- two days before polling day -- the control room will function round the clock, with men manning the phones in the night shift.

Nine lady Child Development Project Officers and seven Lady Extension Officers have been deputed to the control room, which will be operational till April 17.

"Since 90 per cent of the phone numbers belong to male members, we have only spoken to a few ladies who sometimes answer their husbands's phones. They sometimes ask us who we are, wondering why women are calling their spouse. We, of course, then explain to them why," one of the ladies at the control room tells rediff.com on a lighter note.

"Another thing about these calls is that we have heard so many different songs as ring tones," quips another lady on duty, who adds that the responsibility entrusted to them has been an interesting experience.

The locals, whose phone numbers have been registered for the initiative, have been told to keep their phones charged and switched on throughout April 16, the day of polling. "The district magistrate wants to spread the message that all voters should get a chance to vote and also inculcate faith in the public," says Srivastava. 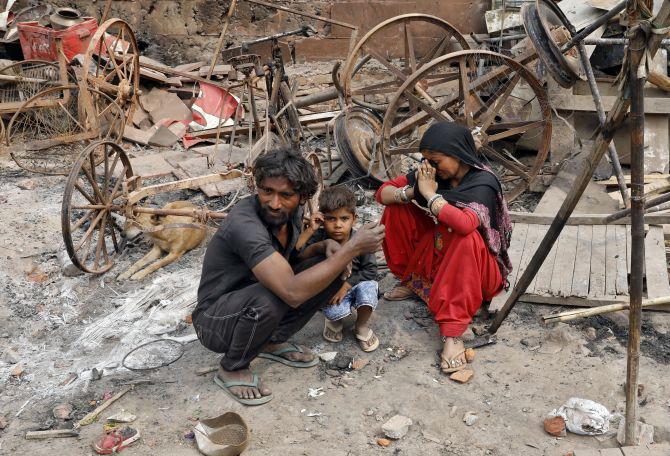