An appreciation of Pixar's Wall-E

Humanity is fat, so fat that our bones have gotten smaller hidden under all the fat sprawled out on recliner seats, hoverboarding from place to place on an infinite food-court loop. It's roughly eight hundred years into the future, and with robots to do all their work, mankind has dumbed down into a race of professional couch potatoes, so engrossed in their ubiquitous videophones that they don't even realise they have a pool. Until now, when the ship's Captain McCrea (voiced by Jeff Garlin, for all you Curb Your Enthusiasm fans) decides that Auto (as in Pilot) is wrong, and that he must fight back and override a command manually. The struggle is frenzied.

And then -- set to the strains of Also Sprach Zarathustra, just like that mega opening from 2001: A Space Odyssey -- the captain struggles manfully to his feet. As he places his chubby toes on the ground and straightens his back, the moment is one of rejuvenated human hope and strength, of man against the machines, of undying faith.

And, of humour. Because under all that glorious subtext, this is just a fat guy coming to his feet.

And that ought act as cue for all of us, because Andrew Stanton's Wall-E is the year's finest film. A story of love, wonderment, dystopia and dirt, this is the masterpiece we never knew we needed. Pixar has always piled on glorious animation -- which is why it is merely par for the course that the film redefines animation itself -- but right from their first feature 13 years ago, they have made us care for the unlikeliest of protagonists. Toys then, bugs a couple of years later, monsters immediately after, and then, very memorably, fish. Then came superheroes, automobiles and rats -- in that order -- and we got used to Pixar's immense ability in making us want to suspend all disbelief, to just buy our tickets, sit in the dark and gape like six-year-olds. For aren't the finest children's films the ones that make us all feel like kids?

With a success-streak that drives every other studio in Hollywood up the wall, Pixar has constantly topped itself, and while we all have our favourites among their animated pantheon, Stanton's latest is Pixar's most ambitious project by far -- a sparsely-verbalised sci-fi tale, halfway bleak, significantly satirical, alarmingly real in its view of a flubbed-up future, and a robotic love story -- and by Walt, they pull it off so bloody marvellously.

The film's protagonist is a tiny little trash compactor called Wall-E (Waste Allocator Load Lifter, Earth-class), a robot cleaning up the planet Earth long after it has been evacuated -- because mankind littered too much. As the centuries tick on, the scruffy little machine has developed a personality, whimsically sorting out his kinda junk from the rest of the trash, and aching for feelings, something he assesses based on Gene Kelly's corny 1969 musical Hello Dolly!, its tape being the only relic of humankind on an arid, garbage-filled landscape. 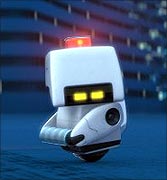 The story is brilliant in its straightforwardness -- a girl-bot called Eve visits and Wall-E falls irresistibly in love, following her along the galaxy in an adventure that shapes mankind's destiny -- yet the magic lies in the detailing. How do you make a robot -- a dented, filthy heap of metal with binocular eyes and no nose and mouth -- appear immeasurably, painfully wistful?

In a wordless first act that will leave you speechless, Wall-E befriends a cockroach, collects old lighters and tosses away a diamond ring, captivated instead by the hinges on the box. Stanton, who also directed the universally loved Finding Nemo, takes his own good time to establish the mood, that of a dusty dystopia, unpeopled except for a robot everybody forgot to switch off. Then suddenly arrives Eve -- our hero calls her "Eve-a", almost like an Italian robot would -- clean and white and shiny as an Optical Mouse made by Apple. (Not the slightest bit coincidental, since Stanton got Johnny Ive, the man who designed the iPod, to make her.)

As an aside, it is worth noting how the Apple touch pervades the film pretty consistently. Wall-E uses a discarded old video iPod as his old-school VCR, there's an old Mac keyboard somewhere in Wall-E's clinically organised curio shelf, the robot Auto is voiced, simply, by Apple's old text-to-speech program, Macintalk and -- in one of the film's finest moments -- when his batteries are charged and he starts up, so to speak, the sound he makes is one Macusers will recognize in a heartbeat: the timeless start-up chime, not quite the same with the current Apple generation but exactly the same as the various Macs of the 90s. Apple's enjoyed a close, easter-egg driven tie-in with Pixar films from the very beginning, but Wall-E is consistently a double treat for Macheads. The roots of this Apple-love obviously lie in the fact that Apple CEO Steve Jobs ran Pixar till Disney overtook it, after which he remains top shareholder, and while this is a mere in-joke for employees still affectionate towards Jobs, it shows the errata present in Pixar's passion.

This is a company that actually has a 'rule' -- you better believe it -- that actor John Ratzenberger must have a role in all Pixar feature films, (in Wall-E, he plays a chubby human named, ahem, John) simply because they consider the aging Cheers actor lucky.

And perhaps it is because of this idiosyncratic whimsy that Pixar manages to constantly create great cinema, cinema far better suited to represent us in future generations than anything we do on the live-action side of the fence -- even smileyfaced 60s musicals. It is earnestness that separates the superb from the Sunday-school, the perfect from the preachy. The wizards at that company (cue the jumping tablelamp logo animation) clearly love what they do, and we're just lucky enough to see them see it through.

On the whole, Wall-E works in the same way that Charlie Chaplin does: an unlikely trampy hero embarks on a silent-movie romance with an elegant, far more attractive female. The odds are stacked against them, the protagonist is klutzy beyond repair, and the poetry found in their impossible dalliance is banal, slapstick -- and, quite simply, timeless.

The film is a masterpiece, and if I had stars to give -- as if it at all mattered -- I would gladly, gratefully hand it six out of five. There are four months to go, but this is the finest English-language film of 2008 so far. By far.

Enjoyed this rave from an awestruck Disney fanboy? Think Wall-E wasn't as good as Nemo? (Heavens!) What is your favourite animated film of all time? Get cartoony or critical or whatever you please at senterfold@rediffmail.com. Cheers, and catch you next week.