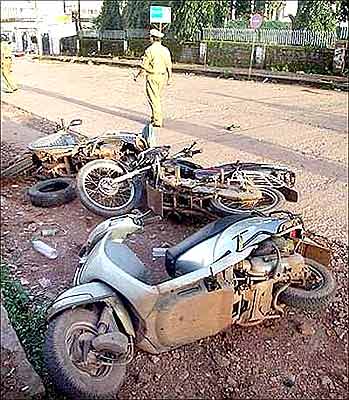 When the Bharatiya Janata Party announced that Nalin Kumar Kateel would fight the Lok Sabha election from the Dakshin Kannada constituency, some sections of the party protested. Kateel, these BJP leaders argued, was inexperienced and had bagged the ticket only because of his proximity to Prabhakar Bhat Kalladka, the most influential Rashtriya Swayamsevak Sangh leader in Karnataka.

Kalladka's brother-in-law Ram Bhat, who formed the Swabhimani Vedike (forum for self respect), felt the BJP had erred in selecting Kateel as its candidate. He also accused Kalladka of running the BJP government in Karnataka and alleged that the party was under the control of pseudo-Hindutva elements.

Kalladka is unfazed by the allegations and says the BJP's chances have never been stronger in the Mangalore belt than it is now.

In this exclusive interview with rediff.com's Vicky Nanjappa, he says the Sangh Parivar has only one agenda in mind -- the rule of Hindutva -- and there should be no diversion from that, come what may.

It seems that BJP bastion Mangalore, now known as the Dakshin Kannada constituency, is under threat from the Congress. How do you see the BJP faring here this election?

There is no threat whatsoever. The party will win and I have full confidence about that. If you think the party is under threat, then it is just your imagination. The final results will speak for it.

People allege that the BJP candidate, Mr Kateel, bagged the ticket only because of you.

There will be allegations from various quarters. Kateel is a good worker and it is the party which took the decision to field him as a candidate. Being close to me has had no bearing on his candidature.

Some people are unable to digest the fact that the party chose him. The party has, thus, proven that good workers are given a chance to contest the election. It is not only about muscle power and money. The party does appreciate youngsters who are dedicated.

The Sangh Parivar has taken keen interest in this campaign. In Mangalore, people say it is the Parivar and not the BJP which is campaigning for Kateel.

The Sangh Parivar working for the BJP is nothing new. We have worked for the candidate in every election. This time too, we are doing the same. Our only agenda is Hindutva and whoever promises to safeguard that has the support of the Parivar.

The Parivar does not work for the BJP only in Mangalore. In every part of the country we have been working for the party. 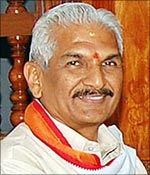 There is talk that you call the shots to such an extent that even the Karnataka government is under your control. Your brother-in-law Ram Bhat made a similar allegation.

(Laughs.) Let people say what they want. The government is working on its own and we do not interfere with it.

Mangalore has seen a lot of violence recently. The attacks on the churches were the worst we have seen in some time. What bearing will this violence against the minorities have on the party's electoral prospects?

It will have a good effect during the election. We have only protested what was wrong and everyone knows about it. It was just hyped up in the media.

When we protest against something wrong, there is nothing wrong about it.

I am telling you all this has just strengthened the prospects of the party.

Christians have vowed to vote the BJP out of power.

I have nothing to say about this. All I have to say is that the BJP will win the election.

Your brother-in-law says you run the BJP like your personal property. He has decided to fight the election and eat into the BJP's vote share.

The results will tell the story. I have nothing more to say about it.

What expectations does the Sangh Parivar have from the first BJP government in south India?

We have only one expectation and that is Hindutva. We want the government to rule as per Hindutva.

Do you think the BJP government is ruling as per your Hindutva agenda?

The rule so far has been good. There are no complaints.

You seem confident that the BJP government in Karnataka will dance according to the tune of the Sangh Parivar.

I did not say that. All I am saying is that the party should not divert from the issue of Hindutva.

What about Varun Gandhi? How does the Parivar see him fitting into your scheme of things?

I do not know much about him. Let us see how he shapes up. As of now, he seems to be committed to the cause of Hindutva.