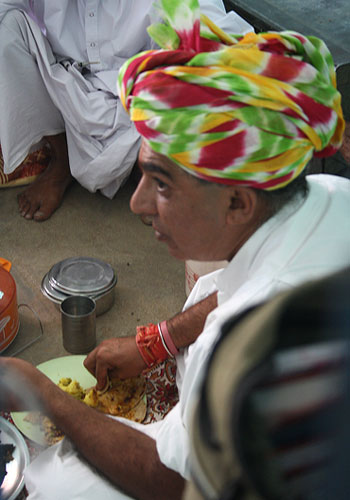 Image: The MP has lunch with the villagers
Photographs: Rajesh Karkera
Manvendra Singh has an unenviable task. He has to canvass in the largest constituency in the country, and that too one which is situated right in the middle of the desert.

As temperatures hovered close to 50 degrees Celsius, rediff.com's Krishnakumar P caught up with the sitting BJP MP at a small madrassa in Sehlau, 90 km from Barmer town.

At the end of what he calls the biggest rally so far (People -- mostly Muslims -- from far and wide had converged at the tiny spread of concrete in the middle of the desert) Manvendra Singh spoke about his roots, the work he has done in his constituency and how we can change as a country by changing the way we drive.

How does it feel coming back to Barmer?

I was here earlier and then spent 10 years in Delhi. It has been nice coming back home. But it was not an easy transition from journalism to politics.

How have you changed after coming here?

I have been here since I decided to join politics. The thing is you have to forfeit your privacy. What you expect in terms of privacy does not exist here and I am a very private person. So that was difficult. Their sense of privacy is different from my sense of privacy.

'We text each other to keep in touch' 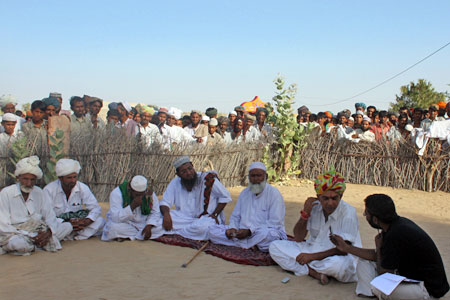 Image: Manvendra Singh near a madrassa in the village
Photographs: Rajesh Karkera
And the way you dress has also changed.

Even when I was here on occasions or for festivals, I used to wear the traditional dress. Now it is daily. I feel more comfortable. I tried the kurta-pyjama earlier. But it was not as comfortable. With this, sitting down on the ground is so convenient and cool.

In this age of technology, how do you connect to people in a vast and predominantly rural constituency? And how do you relate your constituents?

When it comes to connecting with the people, we have skipped the Internet age. We are directly at the SMS stage. Almost every village is connected. There is a huge amount of mobile subscribers and we text each other to keep in touch.

When you stepped out after lunch, there were so many people jostling to get close to you and pass on chits to you. What kinds of requests do you, an MP, often get?

'My connectivity with people will get me votes' 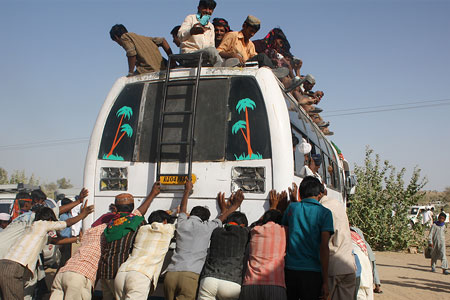 Image: Locals try to push a vehicle stuck in the sand, moments after the MP addressed the village
Photographs: Rajesh Karkera
Moving away from your constituency, there has always been criticism about dynastic politics. That people like you (he is former finance minister Jaswant Singh's son) got into politics the easy way.

I got it easy in terms of getting the first nomination. But it was also easy because this is a constituency that the party had never won. So there was no local claimant.

I couldn't finish the water projects. They have been implemented, but not finished. It is actually ridiculous it took so long. That is what frustrates me. (Barmer is largely desert dotted with small settlements. When asked what ails their town, water scarcity is the first and sometimes only thing people mention.)

A lot has been said about your efforts to modernise madrassas. How did it happen?

When I was floating around here as a losing candidate, I noticed that there are a huge number of people who depend on the madrassas. I felt why deny them an opportunity to experience the mainstream and they too connected to the ideas and were open to it. The idea was also to dispel the myth of what a madrassa is.

'The lunatic right wing fringe doesn't exist in the BJP' 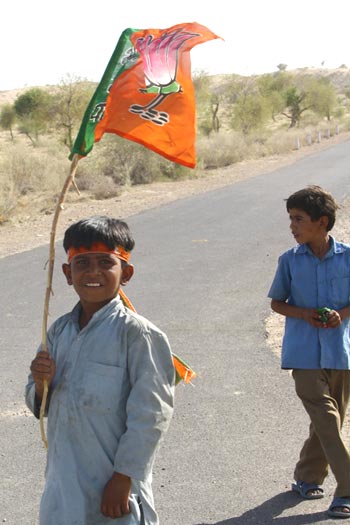 Image: Children guide people who turned up to hear the MP speak
Photographs: Rajesh Karkera
Another standout in your constituency is caste. Unlike the rest of Rajasthan, there has been no caste divide here and how do you work around the caste equations?

I don't follow any caste equation or draw boundaries based on caste. First of all, I don't believe in it and second, if I follow it, I won't get elected.

My idea of a representative of the people is to represent everyone. I can't do it by dividing people.

The Muslims say they vote for you on individual merit. They do not associate you with your party. For a leader like you, youngish and liberal minded, does it bother that there exists a lunatic fringe in your party?

I don't think the party believes in any of the programmes associated with it in popular perception. This lunatic right wing fringe that you mention doesn't exist within the party.

I haven't seen it in 10 years that I have been with the party.

People may be espousing weird ideas, but they are not inside the party. They may be using the party's name.

What about incidents like Mangalore and people like Sri Ram Sene leader Pramod Muthalik? The party didn't dissociate from him for a long time.

I am aware of how perceptions are formed and made. The party can deny it. But people who want to believe it will, and those who do not want to won't. You can't change that. 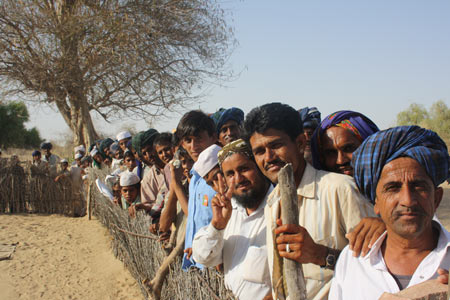 Image: Manvendra Singh's supporters surrounded the madrassa as the MP spoke to rediff.com
Photographs: Rajesh Karkera
This election, a lot of focus is on the first time voter. How is it in a rural constituency like this and how do you woo them?

I don't have to do anything for the first time voter. It is a problem only in the urban areas. It is not a problem getting the rural youth to get excited about voting.

If it was up to you, what is the one thing that you want to change about our country?

I would improve India's driving manners. All our social ills are reflected in the way we drive. The way big vehicles behave with small vehicles, the way vehicles -- big and small -- break rules. And particularly, the posh and fancy vehicles; the way they flout the rules

You said you quit journalism to join politics to oppose Sonia Gandhi's foreign origin. How do you see her now?

I still see her the same way. The time duration doesn't make any difference.

Nothing has changed? Not even after she stayed away from prime ministership?

She may have changed as a person. Her maturity and her knowledge of Indian politics might have improved. But my principle of not wanting her remains the same. It has got nothing to do with whether she is party president or not.

The renunciation was forced. It was not a voluntary thing. The whole world knows it was false.

'Modi obviously has support across states' 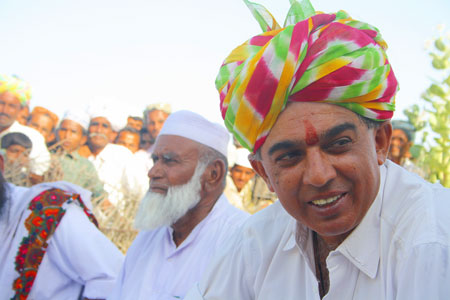 Image: The MP interacts with rediff.com
Photographs: Rajesh Karkera
What are your thoughts on Narendra Modi as a future prime minister?

He obviously has support across states. There is no denying that. But who gets thrown up as a potential prime minister is not known. Right now, the way in which coalitions and the party functions, it could be anybody.

What about his fitness as a prime ministerial candidate?

He is doing a good job as Gujarat chief minister. But I am not sure you can say anything about his fitness as a PM from his performance as CM.

There was an open spat between then Rajasthan chief minister Vasundhara Raje and your family. Why did it happen?

Any problem that has happened, or happening or will happen will be discussed within the house. Not on camera or on tape.

Why did your father choose Darjeeling to contest this Lok Sabha election?

I think the Gorkha Morcha asked for him. And it is a good thing. If we get a seat in West Bengal, it is a leg up for us.

Your performance in Parliament hasn't been too good, in terms of questions raised.