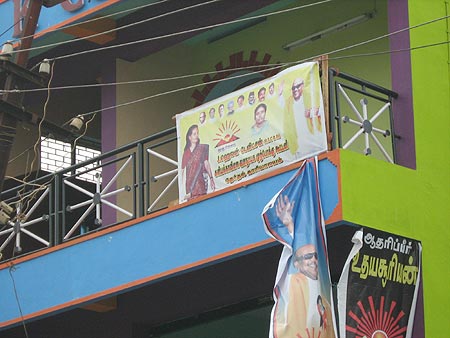 Kanyakumari is the southern-most constituency in the country. It is a new constituency formed after delimitation; it was earlier part of the Tiruchendur constituency. It consists of six assembly segments -- Kanyakumari, Nagercoil, Colachel, Padmanabhapuram, Vilivankode and Killiyoor.

Kanyakumari has the highest per capita income in Tamil Nadu and the second highest literacy rate.

As many as 23 candidates are in the Kanyakumari fray. The main contestants are Helen Davidson of the Dravida Munnetra Kazhagam, Pon Radhakrishnan of the Bharatiya Janata Party, S Austin of the Desiya Murpokku Dravida Kazhagam and P Sivakami of the Bahujan Samaj Party plus the sitting MP A V Bellarmin of the Communist Party of India-Marxist, who is supported by J Jayalalithaa's All India Anna Dravida Munnetra Kazagham.

Davidson is an MSc, BEd. Before this election she was unknown in the district. Now, her face is plastered on every available wall in the villages and towns of the constituency.

Radhakrishnan won this seat in 1999 with the DMK's help. He went on to become a minister in the Atal Bihari Vajpayee government. Locals say that after winning with the Hindu vote, Radhakrishnan went out of his way to please the Christians during his tenure as MP. This, they claim, was the main reason he lost the 2004 election. Locals have unkind words to say about their current MP as well.

In 1998, Radhakrishnan lost the election when the BJP was an ally of the AIADMK. This is the reason the DMK has ventured into this electoral province after 25 years. Chief Minister and DMK supremo M Karunanidhi had said earlier, 'Nellai enga Ellai, Kumari enga thollai meaning 'Tirunelveli district is our border, Kanyakumari is our problem.'

The DMK noted that its support helped the BJP candidate win in 1999; in 2004 it ensured Communist candidate Bellarmin's victory. If the DMK could make others win, why not contest the election itself?

S Austin of the DMDK -- Tamil movie star Vijayakanth's party -- is a former MLA. He has been a member of the Congress and AIADMK before. He will divide the Christian vote. Bellarmin, Davidson and Austin dividing the Christian vote may ensure Radhakrishnan's victory. 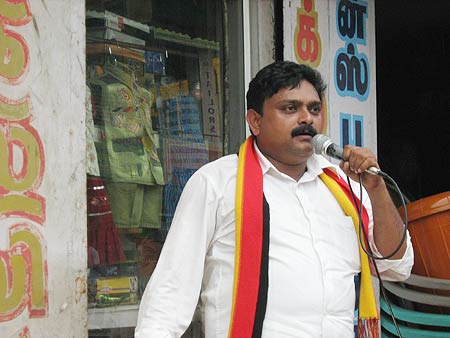 To avoid a division of Christian votes, the local diocese has come out in support of Davidson, the DMK-Congress candidate. The Communists allege that the DMK arm-twisted the bishop for his endorsement.

The Communists say the Association of Bishops of Tamil Nadu has asked Christians to vote for a secular candidate. And no one can question their secular credentials, the Communists add, seemingly unwilling to see the irony of avowed atheists seeking theological assistance.

DMK and Congress leaders retort that the word 'secular' refers to their alliance, to which the Communists respond, "The Congress and DMK do not have a patent on secularism."

When the Church comes out in favour of secularism, which may mean 'do not vote for the BJP,' the Hindu vote gets polarised in the BJP's favour.

Kanyakumari is a communally sensitive district where Hindus and Christians live in peace only when it suits them.

The caste factor will also play a part in the Kanyakumari election. Three of the candidates are Nadar Christians; one is a Hindu Nadar. The Nadars are the dominant community in this district.

Usually, the Christian Nadars do not get along with the fishermen Christians, but during the election season they shed their animosity and work together. If all the Christians vote en bloc for Davidson, the DMK nominee has a good chance of victory.

Says local fisherman Justine, "The Christian vote is a myth. They vote according to their party affiliation. There are Christian supporters in every party. They will not vote for one party."

BSP candidate Sivakami is a former IAS officer who has served as collector of the neighbouring Tuticorin district. BSP supremo Mayawati announced Sivakami's candidature a month before the other parties did. Sivakami's husband belongs to Kanyakumari and she has been campaigning long before her rivals. She is expected to finish fifth in the race; Austin taking the fourth spot. 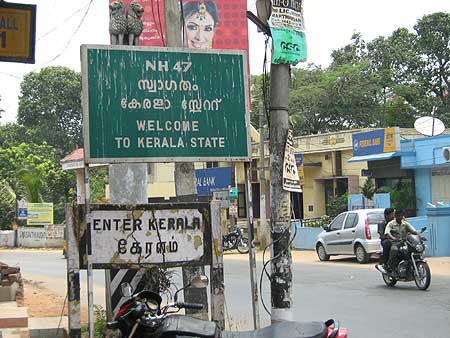 Kaliyakavillai, a town in Kanyakumari, is located on the Kerala-Tamil Nadu border. Half the town is in Kerala; the other half in Tamil Nadu.

Mohammad Abdul Kadar, a shopkeeper, tells us, "This is an educated district. The most educated candidate will win. Helen Davidson will win easily. Her knowledge of English is very good. She speaks like Sonia Gandhi."

"Did you see Sonia Gandhi on TV yesterday?" he continues. "She addressed a meeting in Chennai. She spoke in short clear sentences. Everyone could understand. The translator was not good. He was talking too much. How can you have such long translations of such short sentences?"

Kanyakumari is a tourist destination. The roads are good; water and electricity are not a problem. Locals say a nascent rubber industry has not been encouraged though the district administration bought land for a rubber park in Thovalai.

What Kanyakumari clearly needs is more industries to employ its highly literate workforce. With more industries and more work the locals may stop thinking of themselves as Hindus, Christians and Nadars.

The caste and communal divide in India's southern-most electoral constituency is a sad commentary on the nation and the way this election is being fought and won.