A New Congress for New India

Next
Manish Malhotra has won and Maganlal Dresswala has lost. Malhotra is stylish. He designs what young India wants, while conservative, old-fashioned Maganlal stitches gaudy costumes. Politics has changed. The Maganlals have no chance in young India," said a middle-aged Gujarati businessman from Mumbai's western suburbs.

He was referring to the election results where the Congress won awesomely, defeating the Bharatiya Janata Party and others roundly.

Manish Malhotra and Sharmishta Roy are leading Mumbai-based costume and production designers who advise film directors on the overall look of their movies in order to create a feel-good factor among the audience. Their designs are dreamy, full of pastel shades, and nothing in their films disturbs the eye or soul.

The dirt and squalor, beggars, pollution, caste divide, communal mindset, and plain deception -- just about everything that surrounds us today is missing from their frames.

Once upon a time Maganlal Dresswala was famous in Mumbai for supplying costumes for Hindi films. Today, producer-directors like Aditya Chopra and Karan Johar use Roy and Malhotra to create an entirely new world of relationships in unreal, dream-like settings.

The Congress has done a similar thing with grand success.

"Rahul and Priyanka Gandhi are soft and sophisticated. My children really like them. Frankly, respected Advaniji is mature, but not strong really. For the first time the BJP lost my vote. I didn't go to vote while my children voted for the Congress," says a businessman who is not sorry for the BJP's disgraceful defeat.

Sohini Chatwal, a housewife in New Delhi, explained it in simpler terms.

"I went to the polling booth. I have fears of Mayawati ruling in Delhi so I thought for a while: who do I vote for? I was left with the Congress and the BJP. Lekin, yeh BJPwale ladte khub hai (the BJP is acrimonious)." 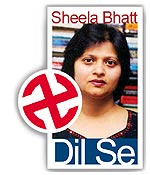 Her vote went to the Congress. The Congress was a great beneficiary of the fear factor in the minds of voters against political instability and the possibility of losing income in a bear market.

'After 1984, Muslims have never voted like this in favour of the Congress'

Prev     Next
The most interesting figures from the election results are this: In this election there was a 2.4 per cent positive swing in favour of the Congress-led United Progressive Alliance, but there was also a 10.9 percent negative swing against the BJP-led National Democratic Alliance. The vote was against what the BJP stand for.

The Congress only needed to hold on to its ground, and that was done through a combination of factors. The Congress indulged in all the tricks of the trade to divide the anti-Congress vote. Dr Singh's track record helped people think that the economy is safer in his hands.

Three, it mobilised like never before maulvis and mullahs, and Muslim youth and women. In February 2009, a serving bureaucrat from the Bihar cadre of the IAS had predicted correctly that the Congress will win 200-plus seats. He based his forecast only after reading Muslim minds in north India.

M J Khan, chairman of the Uttar Pradesh Muslim Alliance, told rediff.com: "After 1984, Muslims have never voted like this in favour of the Congress. This time Muslims wanted to blindly give a mandate to the Congress."

The Congress also raised its pitch to criticise Pakistan as much as the BJP did after the Mumbai terror attackS. This was a masterstroke that silenced the BJP. The BJP did it audaciously while the Congress was subtle yet firm.

The elections are a season when the bazaar is set up to market dreams of a better India. The Congress had a better production designer, stylist, and property and costume designer than the BJP. Nobody can argue that there is no space for a right-wing conservative party in India.

I won't even argue that regional parties or Left parties have outlived their cause. The defeat is not the end of the fight, they know. But the message has come out that if you overdo things in such a volatile society like India, then people can't have peace of mind. Why then should they vote for you?

It has been written many times before, that the Congress claims to be in the centre of the political spectrum, but its economics is centre-to-right while on social issues it takes a centre-to-left stance. Thus, it is spreading expansively right in the centre of India and is monopolising plenty of space simply via political (ideological) grandstanding.

You may exclaim in indignation that it is unfair, but it is there. And it has been so in the last five years. Like the Kabhi Khushi Kabhie Gham genre of Karan Johar films, it has something for all kinds of voters.

By highlighting Manmohan Singh's personality -- tested economist, stable administrator and clean leader -- the Congress relentlessly wooed the urban middle class. Through Rahul Gandhi, it encashed the nostalgia for the Nehru family's legacy. The act was unannounced as it was clever. Only time will tell if it came at the right time or not.

Prev     Next
Rahul appealed to the youth while Sonia and Priyanka presented a fairytale family portrait that entire India identifies with. Their teamwork and harmonisation of expressions about each other helped the Congress.

In all the entire video footage and reportage of Rahul, Priyanka and Sonia Gandhi, one will not find a single frame in which they are not picture-perfect. Above all, the Congress has marketed the Gandhi legacy through this election to produce a Karan Johar kind of candy-floss contemporary, yet unreal, image of itself and has sold it to a new emerging India.

All of us, including Sonia Gandhi, Dr Singh and L K Advani, were looking at oranges and then the apples arrived. The permutations and combinations of trends and preferences of voters in 543 constituencies have resulted in 'stability.'

Arvind Bosmia, a political commentator based in Ahmedabad, says, "While some political pundits (including Advani's aide Sudheendra Kulkarni) diagnosed that the only way out from political blackmail by regional parties was a government formed by the Congress-BJP combine, the people have wielded the vote as a scalpel and removed the blackmailing elements with surgical precision. The pundits showed an unrealistic solution; the voters demonstrated innovative practicality to deliver a government that could only have resulted from the BJP-Congress combine."

Since the last 10 weeks we were talking about the politics of regional imbalance, the plight of farmers, non-deliverance of promises, lack of investment in infrastructure, 230 million poor families without enough food and decent shelter, poor policing, communal divide, hungry children and farmers dying an unnatural death, and a pathetic track record of tackling terrorism.

But the Congress still won a mandate because the party was just not responding to its shortcomings in the election; it was just not talking of those hungry bellies, or the army of unemployed. On the other hand, it was constantly dishing out dreams about a better tomorrow, the images of a perfect family and, in the process, perfecting the art of business skills to win an election through the prescribed methods of Indian democracy.

When you look at the new MPs across the board and their material worth, you know that the issue of dynasty is not on the minds of voters. The Dravida Munnetra Kazhagam's win suggests that the issue of corruption doesn't take away your votes, after all. In the last five years the Maharahstra government can be rated as one of the dullest and most inefficient governments in the country, still, the Congress won more seats there. The party's vote share fell 4.11 percent in Maharashtra, but it got four more seats to touch 13.

'Win, irrespective of the cost'

The BJP believes that in India people vote with emotions, whereas this election suggests this is one election where the people have voted with their brain.

That has made even the many critics of the government happy. By reliable accounts, all the leaders have been nervous about a results which would keep the government on its toes.

The Congress's senior leader Digvijay Singh told rediff.com, "We expected that we will get 165 seats. But this is much, much better than expected."

Now the Congress will have a free hand and that strength will be its only weakness in the coming days. Without a strong Opposition Congressmen may resort to the theory that 'India is Congress and Congress is India.' Congressmen have the arrogance to think that they are the natural rulers of India so, in their over-zealousness they will try to hype Rahul Gandhi more than even he would like it.

Kapil Sibal once said more than 150 publications and dailies in India are owned by Congress members. For loyal Congress fellows it won't take much time to carve a legend out of Rahul within a decade.

Rahul Gandhi and Sonia Gandhi have initiated something that the previous four generations of Nehru-Gandhis could never have thought of. They are turning the Congress into a tightly-held firm with Western-style efficiency and smoothly running branch offices.

The company called the Congress has a unique brand in the form of the good-looking, well-meaning Gandhi family at the top and the people's emotions for them against the backdrop of some eight decades of history. When Mahatma Gandhi entrusted the prime ministership to Jawaharlal Nehru he entrusted the responsibility of caring for national aspirations to him.

With such a reference to context and immense financial resources at its command, the Congress's aim has been to retain power by selling perfect images that you and I would trust.

Some young Congressmen with whom I exchanged notes claim that this firm will work and is likely to produce many more results because Rahul Gandhi does not slow down over issues of ideology.

"We have to win, irrespective of the cost." That was the clear message from Rahul Gandhi to his young colleagues in the last two years. Rahul reads a lot, he is on Twitter. He is so well-mannered that it can silence you. He is fairly knowledgeable about Jeffery Sachs and Paul Krugman's views. People magazine claims he even has a six-pack and loves motorbikes, rock music and black coffee.

Such a man identified with the Congress! Youth within the Congress fold were also in search of leader, a CEO. The family-owned company is trying to adapt a corporate management structure without diluting its hold over the equity.

Away from the public glare, Sonia Gandhi's backroom office is quite corporatised and works with a killer instinct.