News
Business
Movies
Sports
Cricket
Get Ahead
Money Tips
Shopping
Sign in  |  Create a Rediffmail account
Rediff.com  » Election » 'It's a sin to be a farmer' 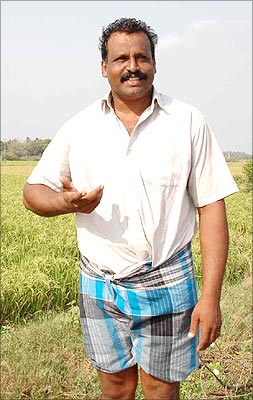 Rediff.com reporters criss-cross the country, listening to voters's voices before the general election.

My ancestors have been farmers for centuries and I follow what they did. But I regret being a farmer. Though I own 10 acres of land, only a small portion is tilled these days. That is mainly because farming is not viable. Daily wages and the fertiliser price have increased, but what we earn has not gone up.

Never before have we had such an anti-farmer government at the Centre. How can a country prosper if its farmers -- those who produce food for the entire country -- are neglected?

I specifically do not want P Chidambaram as a minister. He is responsible for the agricultural mess.

When farmers committed suicide in Vidarbha, he announced a loan waiver which actually was hogwash. How many farmers in India have only 2 hectares of land? Doesn't he know that two hectares of land is nothing?

Today, it is a sin to be a farmer. We are the most neglected lot in the country. We are looked down upon. The politicians should understand that every second a mouth to feed is being added in the country, but along with that, a farmer is also dying.

The government will wake up only when they have to import food. Then, they will understand the folly of not helping farmers.

Today, I have only a small strip of land. I don't get workers to farm, and everything is expensive. See the irony: The farmers are not getting any profit while rice, dal and oil have become so expensive. They are beyond the reach of all people.

Voters Voices from across the country