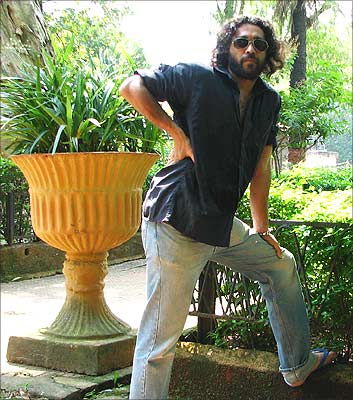 Sandeep Fernandes, 27, is a PR professional who has just started his own PR agency. He has lived in Mumbai all his life, and intends to continue to live there. But when it comes to choosing leaders to run his country and city, Sandeep wants no part of it.

"I've never voted. I'm completely disillusioned by the system. My vote is not going to make a difference, even though Aamir Khan is telling me that it will, on television! (Laughs)

What's the point of choosing the best of the worst? From the options I have right now, whoever I vote for, will do the same thing -- steal our money and not do anything good for the country. Do you really think any of these people care about serving the people? I'd rather not vote unless there's a candidate who I really believe can make a difference, like (Indian cricket captain) Mahendra Singh Dhoni. I don't mean I'll only vote for Dhoni, but he symbolises a real leader to me. So if anyone with those skills and capabilities comes along, I'll go out and vote right now!" he says.

According to Fernandes, Dhoni is a true leader. "A leader is someone who can identify people's talents and get them to use them for common good. Dhoni is not a politician but he's managed to get so many egos together -- from legends like Sachin Tendulkar to the youngsters. It's a great achievement. Today's politicians are not leaders. They're a joke. Most politicians are criminals."

When talking about the issues that plague the country today, Sandeep's unhesitating reply is, "Lack of education. If everyone was educated, they would be able to think for themselves and realise that most politicians are trying to manipulate them. When politicians try and create communal divides, they are targeting the uneducated masses. You and I are not going to go and fight against each other, right? So I think the solution lies in education. Education gives you that clarity of thought which the masses don't have. That's why it's so easy to manipulate them. Do you know how much money is allocated towards education every year? It's a staggering amount of Rs 1,000 crore or something -- but the amount that is actually used is negligible. The rest goes into individual pockets. I think the politicians do this on purpose -- because if everyone was educated, it wouldn't be so easy to influence them!

"Other issues that need urgent attention are corruption and population. There are so many people in this country! Even the jails are overflowing and can't contain all the criminals. It gets difficult to control such large crowds.

"Also, people have started becoming religiously aggressive. I don't know the reason for it, but it's a problem.

"Thankfully, the law and order situation is not so bad in Mumbai right now. You might have terror attacks now and then, but on a day-to-day basis, it's all right. Look at Bihar or even Delhi, which is the capital of our country! There's so much violence, especially towards women."

If Sandeep had his way, we would see M S Dhoni as our new prime minister. "If I had to pick a PM, it would be Dhoni. Anything he touches turns to gold. I was thinking about this the other day -- cricketers should join politics. They make so much money anyway that they won't be tempted to steal ours. Look at the traffic cops -- they are paid so poorly that they're tempted to take bribes. If we paid them better, they wouldn't be so eager to make 50-100 bucks off us.

"And whoever comes to power needs to involve the youth in planning innovative initiatives to fix issues. Young people have fresh ideas and aren't bogged down by baggage."

However, despite all odds, Sandeep thinks there is still hope for India. "That's why we are here, isn't it? It's so easy to migrate and do well elsewhere. But the fact of the matter is that this is our country; this is where we belong. No other place can give you that feeling."

No one can fill Ahmed Patel's void in Congress