Only Deve Gowda can solve our problems 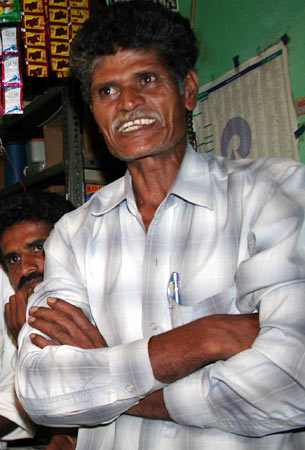 Devraj, from Hassan speaks sadly about his life and explains about the loss he underwent due to a disease that hit his entire potato crop this year. "I read in the newspapers about people in cities complaining about traffic and other issues. I wonder to myself that the issues in the city are so minor compared to ours," he says.

"Here we are complaining so that we are not able to have a decent meal. I have two acres of fields and I have not earned a single penny out of it this year thanks to the potato crop being hit by disease. I do odd jobs such as construction to keep my family going. It is hard for me since I do not have training in such jobs. All through my life, I have only learnt how to be an agriculturist," Devraj says.

"From my leader, who ever it may be I will only ask for a minimum support price for my crop. We are in a desperate situation and if we do not get a square meal a day then the very purpose of living is gone. We are bold people here and none of us have resorted to suicide. However if this kind of apathy from the government continues where they turn a blind eye to our problems continues then that day is not too far when people take the extreme step," Devraj warns.

"I hope that Deve Gowda wins and it is more important that he is part of the government. Only he can solve our problems. I know for a fact that he is concerned about us, but there is a bigger role which needs to be played by the state government. The BJP in the state is intentionally being hostile towards Hassan so that they can ruin Gowda's name," says Devraj.