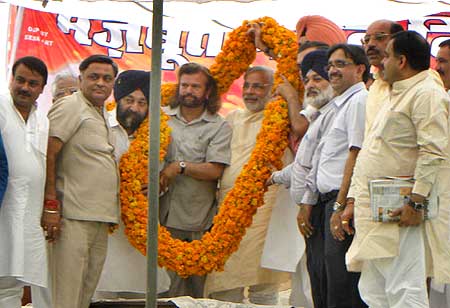 Image: Narendra Modi and singer and BJP candidate Hans Raj Hans are garlanded by their supporters

Vicky Nanjappa and photographer Satish Bodas attend Narendra Modi's rally in Jalandhar where he pulls no punches in attacking the prime minister.

"Manmohan Singhji, you are walking around like a body builder just because we called you a weak prime minister. When L K Advani called you weak, he was not commenting on your chest size, your blood group or your eyesight, he was questioning the prime minister as an institution," Gujarat Chief Minister Narendra Modi told an applauding audience at Jalandhar in Punjab on Friday.

Modi, who is campaigning for Shiromani Akali Dal candidate Hans Raj Hans said, "The prime minister ought not to have felt bad when we called him weak. Instead, he should have answered a few questions that we posed to him."

"I want to ask him a few questions. Why do scams of enormous magnitudes break out when Dr Singh is in the government? The Harshad Mehta scam broke out when he was finance minister and now when he is prime minister, the Satyam scam has broken. Where is the Rs 50,000 crore that has gone missing from the treasury as per the report of the Comptroller and Auditor General?"

"Why did he decide to export sugar in December 2008, only to realise three months later that there is a sugar shortage in the country? A housewife knows how much sugar is needed every year. How come a prime minister did not know about it?"

Modi then asked the crowd, "Do you want an elected PM or a selected one? Why is he not conesting the elections? Don't tell me he could not have got one seat in Punjab, his home state. When he came to Jalandhar, he said Soniaji ne mujhe bheja (Soniaji sent me here). But I would say aap ne mujhe bulaya aur hum chale aaye (you called me and I came along).

'Dr Singh, do you feel anything for your brothers?' 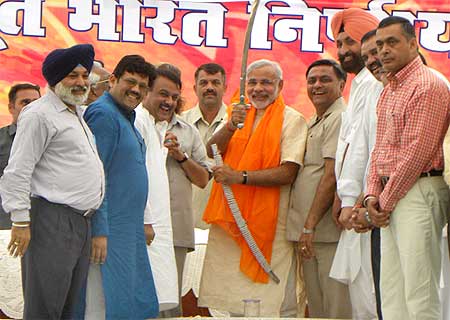 Image: Narendra Modi at the election rally in Jalandhar

Modi also appeared to strike an emotional chord with the voters, saying, "I had a debt to clear and hence I am here. When the earthquake rocked Gujarat, we had no one. Hans Raj Hans was in the US going about on the streets asking for a dollar each from the public. He then sent the money to us. I will never forget that."

Speaking about internal security Modi said Nepal is becoming a corridor for Pakistan's Inter Services Intelligence. "A Hindu nation is under threat and our government is doing nothing," the Gujarat chief minister alleged.

"Sikhs in Pakistan are being tortured by the Taliban. Dr Singh, you are a Sardar. Don't you feel anything for your brothers? When we asked you this you said you wrote a letter. Is this what we want or do we need strong action?" Modi said taking yet another swipe at the PM.