May 06, 2009 15:15 IST
Prasanna Zore travels to madarssas on the outskirts of Barmer town and finds surprising support for BJP MP Manvendra Singh.

Jamil Ahmad looks a stereotypical Muslim. With a flowing, hennaed beard, skull cap and chaste Urdu he impresses you as soon as he starts a conversation. 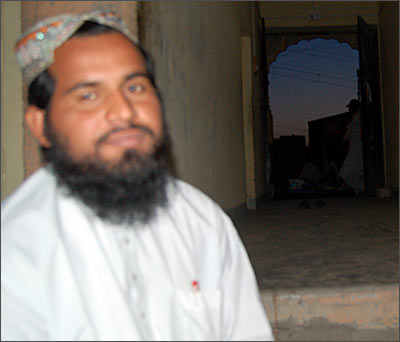 "Bolnewala toh kisi ko nahin bakshate sahib (those who make wild allegations spare nobody, sir)," he says without anger or remorse when asked if a Muslim like him is likened to the Taliban and madarssas are looked upon as a breeding ground for terrorists.

"Those making such allegations should come to our madarssa and take a look at what we do here," he adds, even as he and his colleagues Abid Ali and Haji Mustafa answer our questions about Muslim sentiment in Barmer.

Ahmad, an Aalim Faazil (equivalent of B Ed in Arabic), teaches Arabic and Urdu at Barmer's Darool Uloom Zia-ul Mustafa madarssa to 90 children who study till Class V from mofussil areas of the district that borders Pakistan.

Despite his strong grounding in Islamic teaching, he is not apologetic about supporting Bharatiya Janata Party MP and the Lok Sabha candidate from Barmer, Manvendra Singh.

"Almost half of Barmer's Muslims will vote for Manvendra Singh on May 7," he says. There are more than 300,000 Muslim voters in Barmer, he estimates.

Abid Ali, another Aalim Faazil, who teaches Farsi and Urdu at the madarssa, nods in agreement.

"The Muslims in Barmer look at a contestant as an individual and not through the prism of the party he or she belongs to," he says candidly. For Ali and Muslims like him in Barmer, "the demolition of the Babri Masjid is no more an issue as the people of this country have realised that the BJP did it for political gain. And they have been punished for their sins."

"The Sangh Parivar did try their hand at repeating the Gujarat experiment here, but a few good men from the BJP stopped it when they got wind of it," he adds, refusing to reveal who these 'good men' are.

"Though we maulvis are not much interested in politics, Manvendra Singh has made a home in the hearts of the Muslims here by striving for their development as well as that of the madarssas in this district," he says.

"There are about 280 madarssas in the town of Barmer alone where students learn Urdu, English, science, Farsi, Arabic, maths and computers," emphasises Hashim Kambu Khan of the Jamia Islamia Darul Uloom, another madarssa that teaches some 370 students, situated 20 km on the outskirts of the main town.

According to Kambu Khan, most of the development of the madarssas and the modern practices adopted materialised during the Vasundhara Raje government's rule.

However, both Ahmad and Ali think Manvendra Singh's magnanimity helped Muslims in this backward district improve their lot.

Ali points to the computer lab (which houses six computers with all modern facilities; no Internet though) and a meeting hall that was built from funds given by Manvendra Singh from his MPLAD (MPs Local Area Development Fund).

Talk to any local Muslim here and he will show you a cemetery wall, a public toilet, a hand pump that saw the light of the day "because of Manvendra's efforts."

It is clear that Muslims here don't vote en bloc based on emotive issues. Development ranks on the top of their agenda and they know which candidate can best solve their problems.

Says Haji Mustafa, an autorickshaw driver who is the most vociferous: "I am a staunch supporter of the Congress, but I will still vote for Manvendra and I am not scared to say so publicly. He is the one who has worked for the welfare of Muslims in the last five years. We will vote only for those who are locals and have good knowledge about the problems of people of Barmer."

As if to prove his point he mentions that out of the seven assembly seats in Barmer, the Congress won six and the BJP one.

But Mustafa is confident his favourite candidate will hold his own against the Congress's Harish Chaudhari in the current contest.

"Even if the Congress had an upper hand during the assembly polls Manvendra Singh's charisma will surely win the day for him."

Farmers must stop being STUBBORN!

Will Gehlot's magic work in Rajasthan?